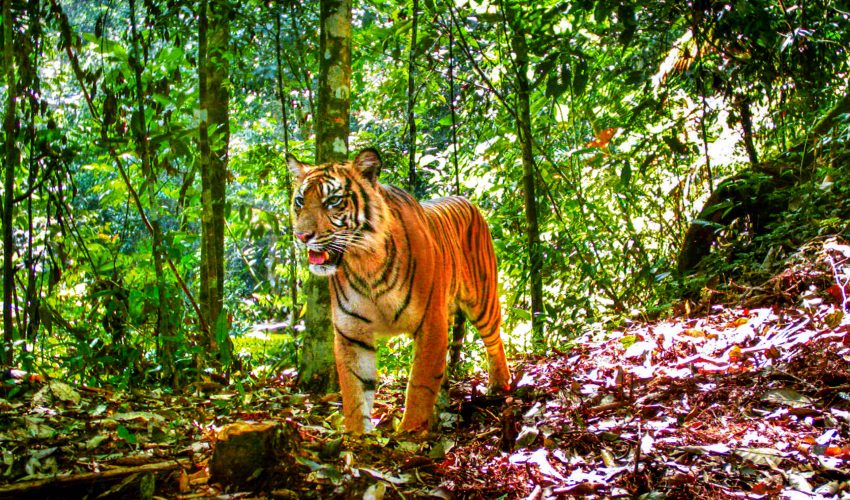 Already-endangered tigers in the Sumatran jungle could face steep population declines if their jungle habitats undergo any more deforestation, according to new research.

Even though tigers in Sumatra had revived their populations over the last two decades thanks to anti-poaching efforts, their habitats are now decreasing and becoming more and more fragmented.

17 percent of the Sumatran jungle forests were cleared between 2000 and 2012. Oil palm plantations are the biggest culprit for logging and habitat degradation in the area.

A new study, published in the journal Nature, followed and tracked endangered tigers in Sumatra for a year.

The team, led by Matthew Luskin, a research fellow with the Smithsonian Institution, spent a year in remote jungle forests and mounted cameras that would take videos and pictures.

After compiling all of the footage, the researchers were able to calculate the Sumatran Tiger’s home range, which is approximately 150 square miles.

This is especially challenging because it means the tigers need large protected reserves to thrive.

“The loss of key habitat is causing significant conservation challenges for Sumatra — and in particular for this critically endangered species,” said Luskin.

The results of the study show that there now remain only two areas large enough to support more than 30 breeding females, which is what is necessary for the continued survival of the species.

According to Luskin, reforestation of Sumatra’s jungle forests is unlikely and protecting what little remains of the endangered tigers’ habitats should be a priority.