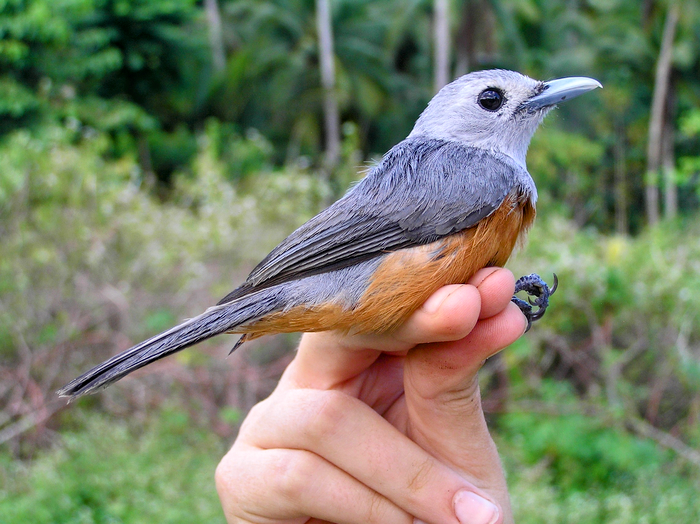 New genetic research techniques are confirming old theories of insular evolution. A study conducted by a team of zoologists at Trinity College Dublin has confirmed that the isolating effects of islands impact the evolution of species, even birds that are some of their best colonizers.

For the investigation, the researchers sequenced genes and took measurements of the “Supertramp” bird of southeast Asia, the island monarch (Monarcha cineracens). This is a bird that’s been studied by evolutionary biologists for decades.

“This study was a great opportunity to work with one of biogeography’s ‘star species,” said first author Fionn Ó Marcaigh. “The island monarch was studied by famous scientist and geographer Jared Diamond in the 1970s, when he saw that they occurred on small islands across a wide range but were entirely missing from larger islands.”

“He named species with this kind of distribution ‘supertramps,’ hypothesising that they essentially evolved into specialist island colonisers in response to their small islands being so unstable.”

“This hypothesis has been influential ever since, but now we’re able to test it using modern genetic methods and help to evolve it further.”

The research was focused on island biogeography, an important part of evolutionary theory and ecology. The study showed that although island monarchs can fly to different islands, they generally stay put after colonizing a new island.

“We found that even though the Island Monarch is clearly good enough at flying to reach these islands in the first place, it doesn’t maintain this dispersive lifestyle after colonisation. This causes the island populations to diverge from one another, to the point that the Island Monarch in our study region is probably a different species to the one Diamond worked with, even though they look the same to the eye,” explained Ó Marcaigh.

“Our statistical analyses indicate that this genetic divergence is linked to the size, elevation, and isolation of the islands, but we found no evidence that the monarchs get physically worse at flying between islands. They just choose to stop doing so!”

The research shows the importance of insularity to the evolution of new species, emphasizing that isolation allows a bird in this case to evolve in isolation from the rest of its species.

The study is published in the journal Frontiers in Biogeography.