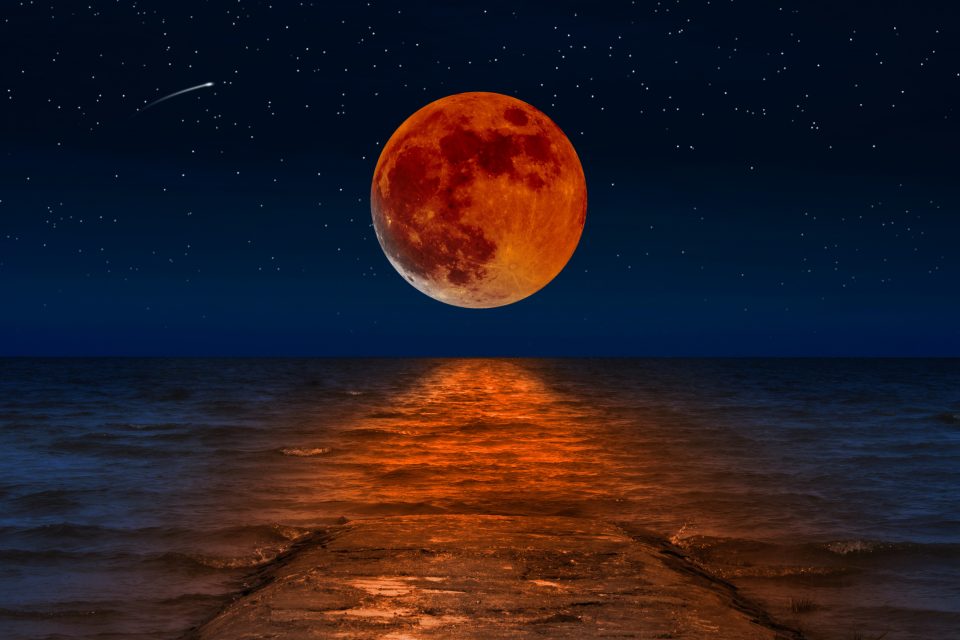 Just hours after it reaches its closest point to Earth, tonight’s full moon will enter our planet’s shadow in a total lunar eclipse. The Super Blood Moon will appear 17 percent larger and 30 percent brighter than a regular full moon.

During the lunar eclipse, skygazers in Australia, western parts of North and South America, and in Asia along the Pacific Rim will see the moon illuminated by a deep red glow.

The moon will begin to turn red around 2:45 a.m. Pacific time. At 4:11 a.m., the moon will become completely engulfed in Earth’s inner umbral shadow, and will appear dark red for about 14 minutes.

“Folks in Hawaii and the Aleutian Islands will get to see the entirety of this eclipse – it will be quite a show for them,” said NASA expert Bill Cooke.

According to NASA, a lunar eclipse takes place when the sun and moon occupy precise positions on opposite sides of Earth. Some of the sun’s light is blocked from reaching the full moon, and our atmosphere filters the light as it passes, causing the moon to take on a reddish color.

In the eastern part of the United States and Canada, the moon will be setting by the time the eclipse takes place. However, a partial eclipse may still be visible just before the moon sets.

Regardless of the viewing location, the Super Moon can be seen all over the world. The moon will reach its perigee – the closest point in its orbit to Earth – tonight at 9:21 p.m. Eastern Time.

“‘Supermoon’ isn’t an official astronomical term, but typically it’s used to describe a full Moon that comes within at least 90 percent of perigee.”

“Even though 17 percent doesn’t make a big difference in detectable size, a full supermoon is a bit brighter than other moons throughout the year.”

“It might be hard to detect a supermoon visually, but it does have an effect on Earth. Because the Moon is in its closest approach to Earth, it can cause higher tides than usual.”

Astronomers and observatories around the world will be livestreaming the Super Moon eclipse, and Space.com has all of the links available for viewing here.