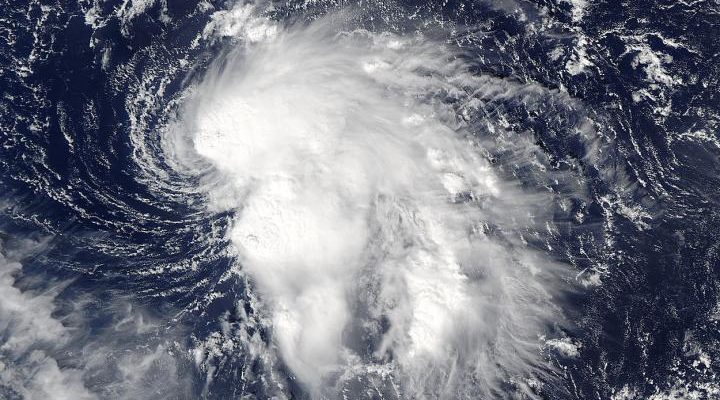 Byadmin
Earth.com staff writer
Vertical wind shear has the ability to tear a tropical cyclone apart, but recently formed Tropical Storm Nicole in the western Atlantic Ocean is holding fast to its strength despite being battered by wind shear. The wind shear is being caused by the outflow of Hurricane Matthew that moved over western Haiti on Oct. 4 and was moving toward the Bahamas on Oct. 5.

Nicole formed at 11 a.m. EDT on Oct. 4 and westerly vertical wind shear was already battering the storm at 1 p.m. EDT (17:00 UTC) when NASA’s Aqua satellite passed over the western Atlantic Ocean. The visible-light image from the Moderate Resolution Imaging Spectoradiometer or MODIS instrument aboard Aqua saw the bulk of Nicole’s clouds were being pushed to the east of the center.

On Oct. 5, Forecaster Cangialosi of the National Hurricane Center (NHC) noted “Nicole continues to hold its strength despite strong wind shear. Satellite images show a rather robust circulation, with a small area of deep convection near the center and a larger band to the east of the center.”

At 5 a.m. EDT (0900 UTC), the center of Tropical Storm Nicole was located near 24.3 degrees north latitude and 61.8 degrees west longitude. That’s about 490 miles (790 km) north-northeast of San Juan, Puerto Rico. It was moving to the west-northwest near 6 mph (9 kph). A turn toward the northwest is expected later today, followed by a turn toward the north by late Thursday.

Maximum sustained winds remain near 50 mph (85 kph) with higher gusts. Little change in strength is forecast during the next 48 hours. Tropical-storm-force winds extend outward up to 70 miles (110 km) east of the center. The estimated minimum central pressure is 1005 millibars.

The NHC forecast noted that Nicole is expected to remain in strong wind shear conditions caused by the outflow of Hurricane Matthew during the next few days, which should prevent the storm from strengthening. After that time, Nicole is expected to interact with a mid- to upper-level low pressure area and could acquire some subtropical cyclone characteristics over the weekend of Oct. 8 and 9.