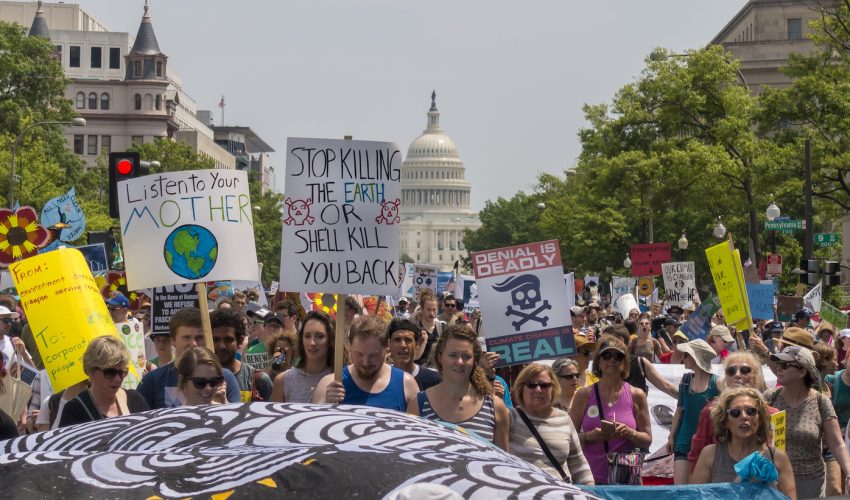 Today, President Trump announced that the United States will withdraw from the Paris Climate Agreement. The pact, which is an unprecedented global strategy to fight climate change, has been signed by nearly every other country in the world. The decision comes as a major blow to environmentalists, and frankly, anyone who cares about the planet.

“We’re getting out. But we will start to negotiate and we’ll see if we can make a deal that’s fair,” Trump said in a speech from the White House Rose Garden. “And if we can, that’s great. And if we can’t, that’s fine.”

“The Paris climate accord is simply the latest example of Washington entering into an agreement that disadvantages the United States, to the exclusive benefit of other countries, leaving American workers, who I love, and taxpayers to absorb the cost in terms of lost jobs, lower wages, shuttered factories and vastly diminished economic production.”

According to the Washington Post, “the decision followed an intense struggle within the administration over the fate of the agreement, with Ivanka Trump, Secretary of State Rex Tillerson and business leaders urging the president to remain in the accord.”

Over the course of his presidential campaign, Trump vowed over and over to exit the deal within the first 100 days of his presidency. While he didn’t quite hit his self-imposed deadline, he did manage to make major changes to the Environmental Protection Agency (EPA).

Together, President Trump and Pruitt have undermined former President Obama’s 2013 Climate Action Plan, criticized the Paris Agreement, and rejected scientific facts about climate change. Trump has expressed the opinion that the terms of the Paris deal forces America to make sacrifices that will hurt the economy with no tangible benefits.

Leaders recently left the G7 Summit in Italy with no confidence that President Trump supports global efforts to fight climate change. In a public statement made after the summit, G7 leaders stated, “The United States of America is in the process of reviewing its policies on climate change and on the Paris Agreement and thus is not in a position to join the consensus on these topics.”

Corporate America has urged Trump to keep the United States in the Paris Accord. 25 big businesses including Apple, Facebook, and Google signed a letter to Trump expressing that the terms of the agreement are best for America’s self-interest, both environmentally and economically. Other industry giants such as Exxon and General Electric also made efforts to convince the President to keep our commitment to the deal.

“Energy needs are a function of population and living standards,” Exxon CEO Darren Woods stated in Dallas Wednesday. “When it comes to policy, the goal should be to reduce emissions at the lowest cost to society,” said Woods.

According to the Washington Post, Woods wrote Trump a letter dated May 9th in what has been called “a last-ditch personal plea” to keep our end of the deal. Woods said this is critical in order for the United States to remain “at the negotiating table to ensure a level playing field” on energy sources.

While awaiting today’s much-anticipated decision, European Union leaders teamed up with China and vowed to move forward with their commitment to the Paris Agreement. The position of these countries to follow through with the terms of the deal were drafted in a joint statement that will be released Friday, regardless of the President’s decision.

Trump’s decision to retract America’s willingness to participate in this historical effort to curb climate change will not be easily forgotten by the other great powers of the world.  Americans will now be faced with the uncertainty of when and how climate change will be dealt with here in the United States.