US forest fires have doubled from human-caused climate change • Earth.com 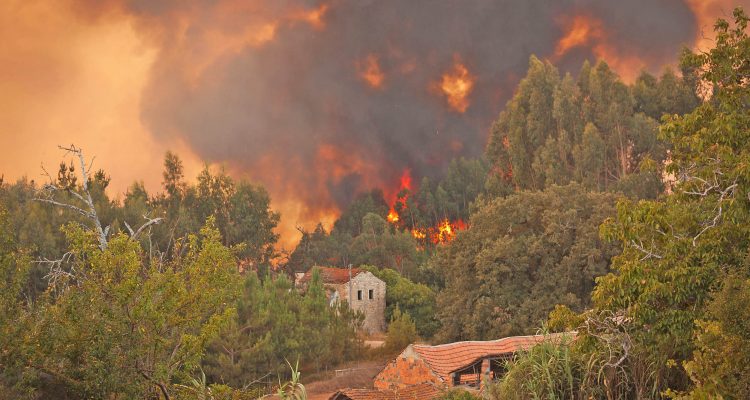 US forest fires have doubled from human-caused climate change

Byadmin
Earth.com staff writer
Human-caused climate change has nearly doubled the amount of land burned in western U.S. forest fires over the past three decades, according to a new study by researchers at the University of Idaho and Columbia University.

The researchers estimate that human-caused climate change caused an additional 16,000 square miles of western forest lands to burn between 1984 and 2015. That’s about the size of the Bitterroot, Clearwater, Kootenai, Panhandle and Nez Perce National forests combined, or more than 30 times the size of the city of Los Angeles.

“We’re no longer waiting for human-caused climate change to leave its fingerprint on wildfire across the western U.S. It’s already here,” said John Abatzoglou, the study’s lead author and an associate professor of geography in UI’s College of Science. “Over the last several decades we’ve seen longer fire seasons, larger fires and more area burned — and those observations led us to ask, ‘Why?’ What we found was that human-caused climate change played a resounding role in observed increases in forest fire activity.”

The study, which will be published in the Oct. 10 online early edition of the Proceedings of the National Academy of Sciences, is the first to quantify the degree to which human-caused climate change has increased wildfire activity in western U.S. forests. The study examined forested regions of the lower 48 states from the Rockies to the Pacific.

“Knowing that human-caused warming is responsible for approximately half of the western U.S. forest fire area in the past few decades, and understanding that this effect is becoming increasingly dominant, helps us better anticipate continued changes in forest fire activity in the coming decades,” said co-author Park Williams, a bioclimatologist at Columbia University’s Lamont-Doherty Earth Observatory.

“This knowledge will allow us to make more educated fire and land management decisions.”

The United States has seen dramatic fire seasons in recent years. In 2015, 10.1 million acres burned across the country — the largest since the National Interagency Fire Center began documenting wildland fire area in 1983. Federal firefighting costs for the 2015 fire season hit a record-high $2.1 billion.

The uptick in fire activity over the past decade has led to some calling recent wildfire seasons the “new normal.” Abatzoglou and Williams goal was to parse out how much of the observed increase in the extent of forest fires was due to natural climate variability and other factors, and how much was rooted in human-caused climate change. They chose to focus on forest fires, since grassland fires respond differently to climate variability.

Abatzoglou likened the many factors that lead to forest fires to instruments in an orchestra: When any instrument plays louder, the volume of the whole orchestra increases. His and Williams’ research finds that both human-caused climate change and natural variability have been playing with increasing volume in recent decades, leading to record-breaking fire seasons.

The history of fire suppression and forest management practices in parts of the West has also played an important role in the increase. Fewer fires have led to overgrowth in many forests, so there is now more fuel available to burn when conditions get dry.

Increased temperature and reduced relative humidity facilitate fire activity by drying out timber. Such conditions allow fires to start and spread and make them more difficult to suppress.

“Wildfire is a function of several processes, some natural and some human. But what we know is on a year-to-year basis, warm, dry summers enable large fire seasons,” Abatzoglou said. “There is a remarkable relationship between the extent of forested area burned and fuel dryness that allows us to implicate climate as the preeminent driver of annual variability in forest fire over the past three decades.”

Abatzoglou and Williams complied data from eight measures of aridity, or dryness, in western U.S. forests. They then used climate model experiments to identify how human-caused climate change influenced these aridity measures.

They found that spring and summer temperatures warmed by 2 to 2.5 degrees Fahrenheit (1 to 1.5 degrees Celsius) since 1950, which is in agreement with the warming that climate models attribute to human-caused climate change. This warming led to significant drying within western U.S. forests, accounting for approximately 55 percent of the documented increases in forest aridity from 1979 to 2015. The remaining 45 percent was due to natural climate variations that caused reductions in humidity and precipitation in some regions.

This influence has been particularly notable since the turn of the century: Abatzoglou and Williams estimate that since 2000, human-caused climate change led to a 75-percent increase in the extent of forested lands with elevated aridity and contributed about nine additional days per year with exceptionally dry fuels and high fire potential.

While human-caused climate change and natural climate variability have conspired to increase aridity in recent decades, natural variability could possibly revert and reduce aridity in coming decades, Abatzoglou said. However, unmitigated human-caused climate change will likely have a growing effect on fire seasons — like the drum section of the orchestra growing louder and louder.

“Is this the new normal? I’d say no, but we’re heading there,” Abatzoglou said. “We expect that the effects of human-caused climate change will intensify over the next several decades. So long as there are trees in our forests, climate change will continue to set the table for large fire seasons.”

“The impact of anthropogenic climate change on wildfire across western US forests” is available from PNAS through EurekAlert.

The University of Idaho, home of the Vandals, is one of only 72 land-grant research universities in the United States. From its residential campus in Moscow, UI serves the state of Idaho through educational centers in Coeur d’Alene, Boise, Idaho Falls and Twin Falls, and Extension offices in 42 counties. Home to more than 11,000 students statewide, UI is a leader in student-centered learning and excels at interdisciplinary research, service to businesses and communities, and in advancing diversity, citizenship and global outreach. UI competes in the Big Sky Conference and Sun Belt Conference. Learn more: http://www.uidaho.edu.