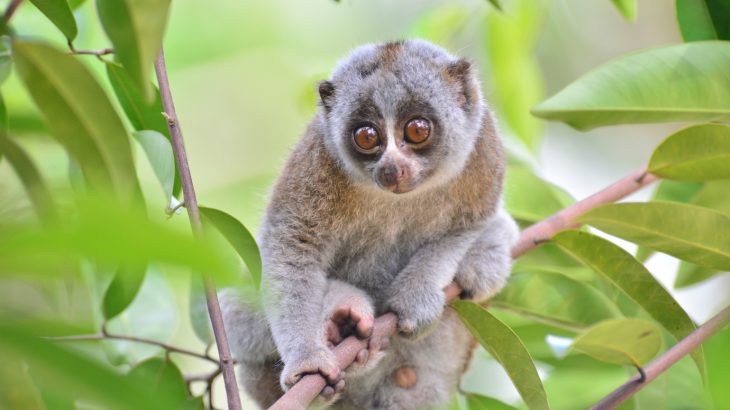 The internet has brought us many great things but perhaps its most important contribution is… cute animal videos. YouTube and Instagram allow us to quickly and easily access hours of videos of cats wearing funny outfits and dogs greeting their owners. But other animal videos, while they may seem superficially cute, are actually causing harm to the animals depicted.

Videos of slow lorises being tickled began popping up on the internet a few years ago and exploded from there. A simple search on YouTube of “slow loris” brings up an endless stream of videos of slow lorises with millions of views. It’s hard to look at the animals’ huge, doe eyes and tiny hands and not think they are adorable, but it is important to remember that these animals are wild and suffer for the sake of our entertainment.

Since the slow lorises became a social media sensation, they have become more prominent in the pet trade. Slow lorises actually encompass a few species of nocturnal primates. All of the species face severe threats to their survival such as trade from use in traditional medicine and habitat loss. The Javan Slow Loris, which is commonly seen in the pet trade, is Critically Endangered and has experienced a population decline of over 80% in the last 24 years. All of the species are listed on Appendix I of the Convention on International Trade in Endangered Species of Wild Fauna and Flora, affording them the highest protections in the international trade.

Despite their international protections, the illegal capture of slow lorises in the wild is rampant. Many of the individuals captured from the wild won’t even make it into the pet trade. According to International Animal Rescue, up to 90% of individuals die during transport. Individuals who survive may falsely be advertised as captive-bred to consumers.

Life doesn’t get much better for the slow lorises once they enter the pet trade. Although the animals are perceived as harmless, they are actually the world’s only venomous primate. Slow lorises often have their teeth forcibly cut to make them easier and safer for people to handle. The procedure can be done with rudimentary tools such as nail clippers and wire cutters without any anesthetic.

Once the slow lorises are bought, they live in an environment far removed from their natural habitat. A 2016 study analyzed videos of pet slow lorises to assess the animals’ welfare. The researchers used criteria known to be indicative of negative welfare in slow lorises such as human contact, exposure to daylight and signs of stress. All of the 100 videos analyzed showed at least one sign of stress and almost one-third of the videos showed all five signs.

Many viral videos that supposedly show the slow lorises acting cute actually depict signs of stress. The slow lorises are not raising their arms because they enjoy being tickled; rather, individuals raise their arms above their heads as a defense mechanism to release venom.

It is not too late for the misunderstood animal. International Animal Rescue has launched a campaign entitled “Tickling is Torture” to raise awareness with consumers. Sadly, the trade in slow lorises seems to be largely perpetuated by ill-informed animal lovers. International Animal Rescue encourages individuals to help slow lorises not only by refusing to buy the animals but by also refusing to “like” or “share” any videos that depict slow lorises as pets.

The tides already seem to be shifting. Just last month, International Animal Rescue rescued 20 slow lorises from captivity and released them into an enclosure within a rainforest environment. The slow lorises were all previously kept as pets but their owners stepped forward and relinquished the animals.

While these 20 slow lorises slowly acclimate to the wild before being released, many more still suffer in unsuitable home environments. Hopefully, campaigns against the slow loris trade will achieve their viral fame as well.