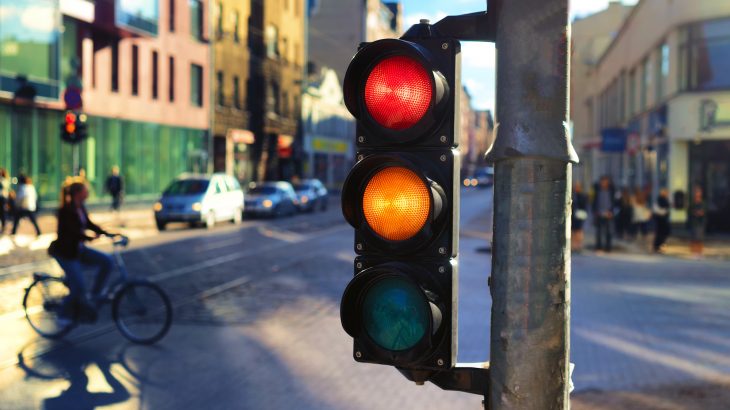 One of the biggest hassles for drivers is the headache-inducing traffic jams that clog up commute times on the road, bringing cars to a slow crawl down freeways and backing up major intersections.

Many studies have examined ways to reduce traffic jams and make commutes more efficient, as there are many benefits beyond just helping drivers get where they need to go quicker. Improving traffic flow could reduce emissions and make the roads safer for all drivers.

Researchers from Carnegie Mellon University (CMU) are working on a solution that could potentially do away with traditional stop lights and reduce commute times by 40 percent.

By replacing traffic light with virtual ones, the researchers say that it could help make driving much more efficient and drivers would have personalized traffic lights on their dashboard which would reduce wait times at lights.

“With this technology, traffic lights will be created on demand when [two cars] are trying to cross this intersection, and they will be turned down as soon as we don’t need it,” Ozan Tonguz, a professor at Carnegie Mellon University, who helped develop the technology, told CNN.

The virtual traffic lights (VTL) would appear when needed on the driver’s windshield or dashboard as a green or red signal.

The driver would be prompted to stop or go based on who else is driving on the road, and it would essentially be the cars that would manage major intersections by talking to each other and sharing GPS, map, and speed data.

“When the driver is looking through the windshield, they’ll see that going straight is a green light, and turning right is a red light,” Virtual Traffic Lights (VTL), a firm created by the Carnegie Mellon researchers, told the Daily Mail. “It’s a seamless process, the driver does not get involved in this decision making. The virtual traffic light will turn off once the driver proceeds through the intersection.”

The virtual traffic light system was tested near the CMU campus with positive results. There were two vehicles that were approaching an intersection and one was “lead car”. The lead car had a red virtual light which gave the other car the go ahead.

The researchers tested the virtual traffic light system at over 20 junctions.

“Preliminary results of the field tests conducted in Pittsburgh with vehicles using VTL equipment indicate that VTL is capable of coordinating traffic at intersections and reducing the commute time of people,” the researchers wrote in the study which was published in the Journal Arxiv.