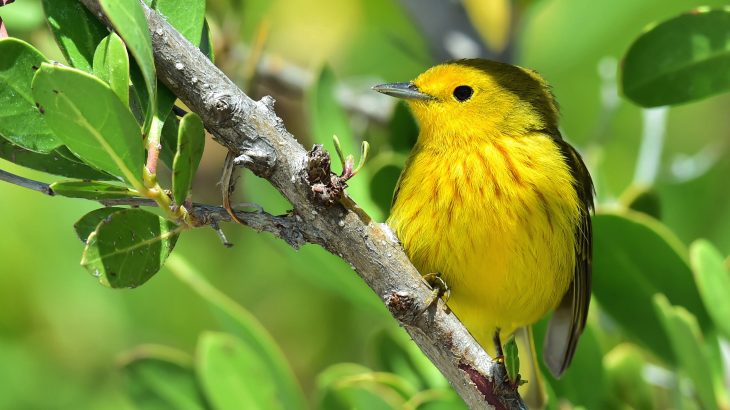 Yellow warblers find their preferred climate over thousands of miles

As climate change transforms the planet, some areas will get hotter and drier, while others will get wetter. In a new study from UC Davis, experts have discovered that yellow warblers can track down their preferred climate over thousands of miles.

The research revealed that the songbirds have the same climate from one side of their migration range to the other.

“What’s amazing is that the birds track similar climates despite the fact that they have migrated thousands of miles,” said study co-author Rachael Bay, an assistant professor in the Department of Evolution and Ecology, College of Biological Sciences. “It seems that individual birds may be adapted to particular climate regimes.”

Yellow warblers have breeding grounds throughout North America and fly south to spend their winters in Central and South America.

In a previous study, Professor Bay and her team linked genetic variations among warblers with precipitation patterns across North America. This indicated that certain individuals are adapted to dry conditions, while others thrive in wet conditions. Based on their genetics, the researchers were able to predict where birds would breed.

Professor Bay collected data for the current study during her postdoctoral research, in collaboration with banding stations and collecting sites in North and South America.

When the experts compared climate patterns in their winter and summer areas, they found that individual birds showed preferences for drier or wetter areas, but not for warmer or cooler areas.

Yellow warblers that bred in relatively dry parts of North America, such as California’s Central Valley, had overwintering grounds in dry parts of South or Central America.

“This is the first demonstration of using individual genetic tracking to link climates across the migratory cycle within a bird species,” said Professor Bay.

The specialized ranges could have consequences for how the birds respond to climate change. Professor Bay speculates that the variation she and her colleagues found might provide the raw material for the species to adapt to changing climate conditions.

For example, bird populations that are adapted to dry conditions could ultimately displace those adapted to wetter ones. This transition may have already begun, as the researchers found that population sizes of yellow warblers have changed with precipitation patterns over time.