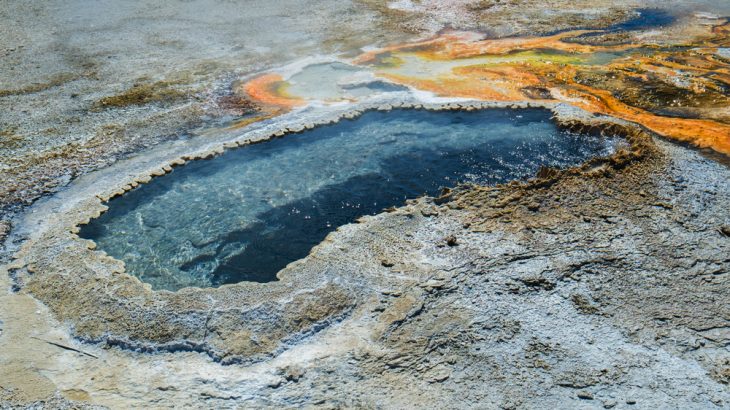 A thermal spring in Yellowstone National Park has erupted, spraying steam to heights not recorded since 1957, according to park officials.

The seismic activity began Sept. 15 when Ear Spring, on Yellowstone’s Geyser Hill, erupted for the fourth time in the past 60 years. The thermal spring was dormant until last week’s activity.

It’s no longer blasting steam and scalding water 20 to 30 feet high, but it has continued to erupt. The thermal spring has been sending up a near-constant two feet of hot water, park spokesman Neal Herbert told the Associated Press.

Ear Spring is just one of the dozens of hot springs, geysers and other thermal pools that dot Yellowstone. Named because it’s similar in shape to the human ear, it last erupted 14 years ago.

Now it’s active again, and it’s not the only activity seen on Geyser Hill in recent days. Park officials closed a boardwalk to visitors in the Upper Geyser Basin after a number of new vents and surface fractures began erupting. The move was to keep visitors from being injured by superheated water spewing from thermal springs, geysers and other openings in the Earth’s surface.

Unlike a geyser, which has an obstruction that prevents hot water from reaching the surface except during eruptions, a thermal spring like Ear Spring has hot surface water most of the time. However, hot springs can still occasionally erupt.

Ear Spring isn’t the first dormant site at Yellowstone to erupt this year. Steamboat Geyser has also been active in recent months. It erupted again earlier this week.

While scientists are keeping a close eye on the new activity, it’s not a sign that a volcanic eruption is imminent, Herbert said. The park sees significant and quick changes fairly frequently, he said.

The boardwalk may not be the last of the park’s closures, either.

“It’s still in flux,” Herbert said. “There is still water flowing in new places and some of the springs that had been dormant have been erupting nearly constantly.”