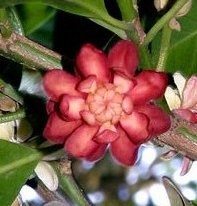 Idiospermum australiense is a species of Magnoliopsida first described by Friedrich Ludwig Diels, and given the simplified Asian name by Stanley Thatcher Blake. Idiospermum australiense belongs to the genus Idiospermum, and the family Calycanthaceae. None of these subspecies are listed. Idiospermum is a genus containing a single species of tree, Idiospermum australiense, found in Australian tropical rainforests. The species represents one of the earliest known lineages of flowering plants, dating back as far as 120 million years. It is found today only in the Daintree and Wet Tropics rainforests region of north-eastern Queensland. It is endemic to a very few locations in north-eastern Queensland (e.g. in Daintree National Park), in the very wet lowland parts of the forest, in groups of 10–100 trees together (rather than scattered individuals). Common names include ribbonwood and idiot fruit (Hyland et al. 2010). Ribbonwood trees grow naturally in their wet tropical rainforest habitats as evergreens up to about 20–40 m (70–130 ft) tall and about 90 cm (35 in) in diameter at breast height (DBH). The simple leaves grow singly, in pairs or in whorls of 3–4, each one measuring about 12–25 cm (5–10 in) long and 5–9 cm (2.0–3.5 in) wide. The flowers measure 4–5 cm (1.6–2.0 in) in diameter, with all floral organs spirally arranged (Staedler, Weston & Endress 2007). The tepals are initially creamy white when the flower opens, then turn red as the flower ages. The "fruits" have very distinctive features and do not fit within the definition of true fruits as such: all the protective layers decay while still on the parent tree and each one released is an extremely large (8 cm (3.1 in) diameter) naked plant embryo (Staedler, Weston & Endress 2009). This is one of the very largest embryos in flowering plants. It is very toxic, inducing symptoms (in cattle) similar to strychnine (Hyland et al. 2010).