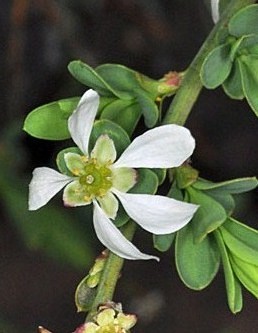 Glossopetalon spinescens, syn. Forsellesia spinescens, is a species of flowering shrub in the family Crossosomataceae known by the common names greasebush, spiny greasebush, Nevada greasewood and spring greasebush. It is native to Mexico and the western United States, where it grows in mountainous habitats, often on limestone substrates. Glossopetalon spinescens known by the common names greasebush, spiny greasebush, Nevada greasewood (in California), spring greasebush and spiny greasewood, depending on location/source. The name 'greasewood' is also a common name for Larrea tridentata in Texas. The different varieties of this species have also been given separate common names when they were still regarded as distinct species, i.e. plains greasebush for G. planitierum, etc. This shrub forms a dense, erect clump of many thin, branching, thorny stems approaching 3 metres (9.8 ft) in maximum height. The green oval leaves are less than two centimeters long. Small white-petalled flowers appear in the leaf axils. The fruit is a single or double follicle a few millimeters wide, and 3 to 5mm long. A follicle is a fruit which splits lengthwise when it is ripe to release its seeds. It is longitudinally striated or ribbed, and coloured green when young, turning light brown. Glossopetalon spinescens occurs across a wide range, from southeastern Washington state in the north, south to isolated disjunct populations in the south of Mexico (Guanajuato, Oaxaca, Tlaxcala and Veracruz). Besides the Mexican states mentioned above, G. spinescens also occurs in the states of Chihuahua, Coahuila, Nuevo León, Sonora and Tamaulipas. In the US it occurs, from north to south and west to east, in the states of Washington, Idaho, Montana, Oregon, Wyoming, California, Nevada, Utah, Colorado, Arizona, New Mexico, Oklahoma and Texas. In none of these states is it widespread, but rather localised to a number of counties. In general, this is a rare plant, found most often in scattered concentrations. In Montana and Wyoming it is especially rare, only occurring in a single county (Beaverhead and Sweetwater, respectively). It occurs in calcareous soils on limestone. It occurs at altitudes of approximately 850 to 2200m in Arizona. It grows on hillsides, rocky slopes and crevices and ledges of cliffs in canyons and outcrops in desert scrub, grasslands, chaparral and juniper woodland habitats.

How many invasive plant species are in the world?
News coming your way
The biggest news about our planet delivered to you each day