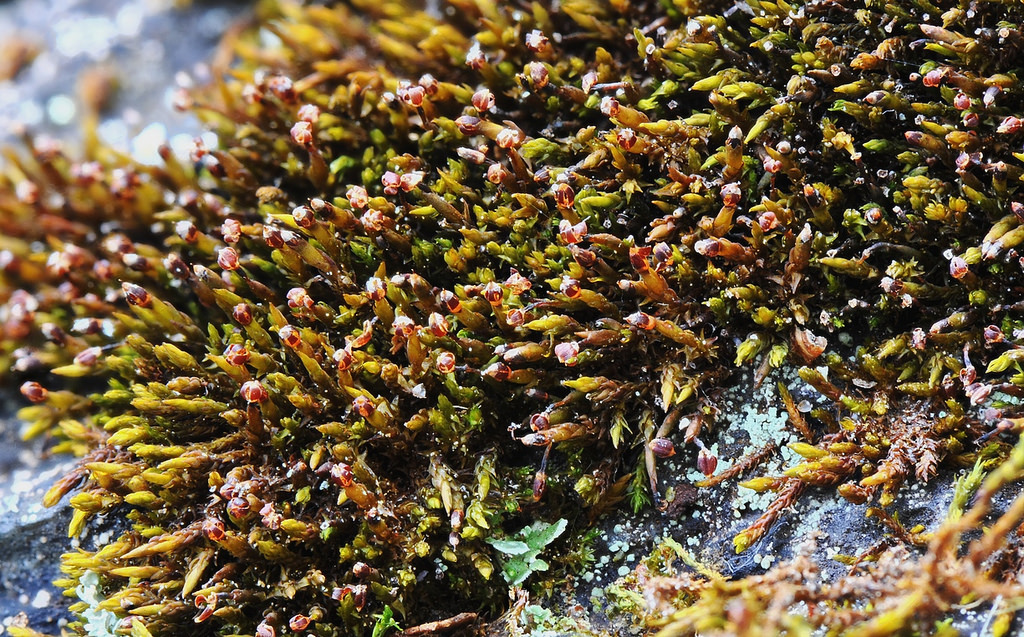 Andreaea rupestris (Stone Giant Moss) is a Laubmoos - species from the family Andreaeaceae . Synonyms are Andreaea petrophila Fürnr. or Andreaea papillosa Lindb. It is a variegated species that has been described with a number of varieties. Andreaea rupestris forms pillow-shaped, small to medium-sized, brownish-green or brown-red to blackish turf with about 1 to 2 centimeters tall plants. The densely-packed leaves have no leaf ribs, they are usually up to a millimeter long, ovate or lanceolate, short and dull pointed, often slightly einseitswendig, dry-fitting to spreading, wet strongly spreading to sparsely sticking out. The Laminazellen have strongly thickened cell walls, are spotted and on the back papillös. Far down in the upper part of the leaf and at the edges of the leaf they are approximately square, in the middle of the leaf and at the leaf base short to long rectangular. The moss is monoecious. Spore capsules are often formed, the spore maturity occurs in summer. The spherical capsule opens with four broad longitudinal cracks. Spores are often unevenly developed, larger green are 26 to more than 32 microns in size, smaller shrunken are brown and about 20 to 24 microns. Andreaea rupestris grows on silicate rocks in clear to partially shaded and dry to moist layers. In Central Europe it is particularly in the mountain country up to the high mountains (up to 3000 meters height) common, in the north German lowland it is rare. Its worldwide distribution includes Europe, Asia, America, South Africa, Australia, New Zealand and the Antarctic.