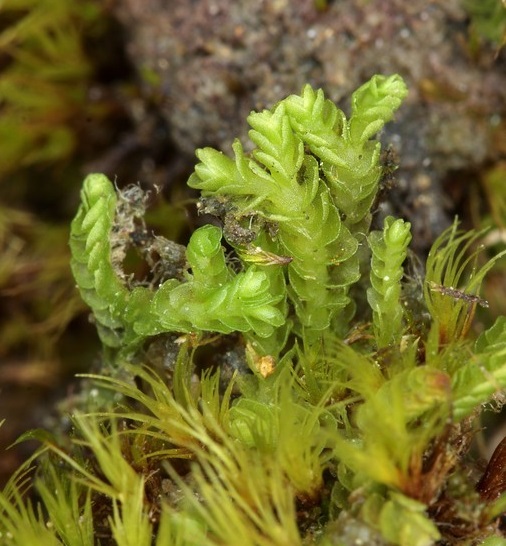 Nardia geoscyphus, Plants are usually prostrate, with erect shoot tips and forming rather dense, thin, non-aromatic mats, normally pale green to brownish, but occasionally more strongly coloured red or purple. Shoots are 0.5-1.5 mm wide and up to 2 cm long, rarely longer, with the leaves often appressed and overlapping, with the back margin hardly extending below the stem. The leaves are rounded to kidney-shaped, usually much wider than long (up to 1.2 mm wide and 0.8 mm long), and almost horizontally inserted on the stem, with the tip having a shallow, rounded notch or occasionally shallowly bilobed. Underleaves are small and sometimes hard to see in the rhizoids. N. geoscyphus is usually fertile, with male organs in bracts immediately below the female inflorescence. The perianth has a thickened sheath that often forms a swelling at an angle to the main axis of the stem. Usually easily distinguished from N. scalaris (p. 152) by the shallowly notched leaves, but it may sometimes be necessary to check the inflorescence, with male and female organs on the same shoot in N. geoscyphus. The notched leaves and the presence of underleaves should distinguish N. geoscyphus from Jungermannia species (pp. 143-150). N. insecta (Paton, p. 296) is a very rare plant which differs from N. geoscyphus in the more deeply bilobed leaves. This is rather an unpredictable species, and is seldom present in abundance. It is most frequent on mildly base-rich soil banks in the uplands (for example on calcareous cliffs), but sometimes grows on damp, gravelly soil in disused quarries.