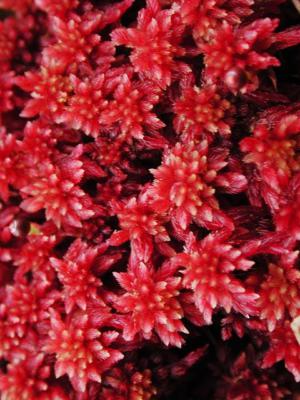 Sphagnum, like all other land plants, has an alternation of generations; like other bryophytes, the haploid gametophyte generation is dominant and persistent. Unlike other mosses, the long-lived gametophytes do not rely upon rhizoids to assist in water uptake. Sphagnum species can be unisexual (male or female, dioecious) or bisexual (male and female gametes produced from the same plant; monoecious); In North America, 80% of Sphagnum species are unisexual. Gametophytes have substantial asexual reproduction by fragmentation, producing much of the living material in sphagnum peatlands. Swimming sperm fertilize eggs contained in archegonia that remain attached to the female gametophyte. The sporophyte is relatively short-lived, and consists almost entirely of a shiny green, spherical spore capsule that becomes black with spores. Sporophytes are raised on stalks to facilitate spore dispersal, but unlike other mosses, Sphagnum stalks are produced by the maternal gametophyte. Tetrahedral haploid spores are produced in the sporophyte by meiosis, which are then dispersed when the capsule explosively discharges its cap, called an operculum, and shoots the spores some distance. The spores germinate to produce minute protonemae, which start as filaments, can become thalloid, and can produce a few rhizoids. Soon afterwards, the protonema develops buds and these differentiate into its characteristic, erect, leafy, branched gametophyte with chlorophyllose cells and hyaline cells