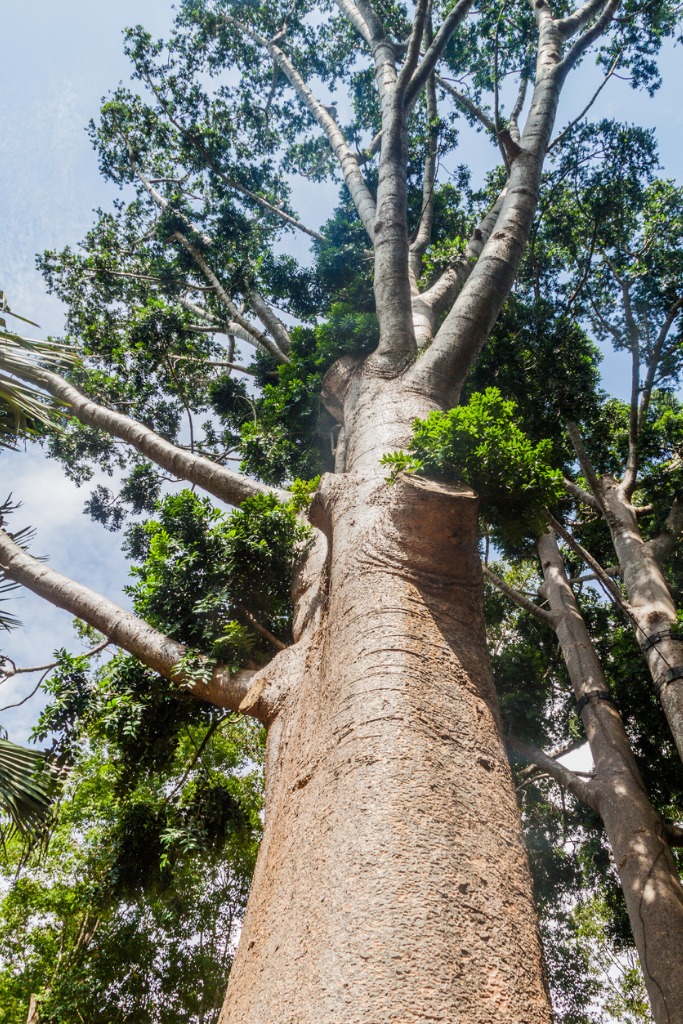 Agathis robusta (syn. A. palmerstonii), the Queensland kauri (pine) or smooth-barked kauri, is a coniferous tree in the family Araucariaceae. (Although sometimes called a pine, it is not a true pine, and has leaves, not needles.) It has a disjunct distribution, occurring in Papua New Guinea and Queensland, Australia. Populations in Papua New Guinea may be treated as the distinct species Agathis spathulata. Agathis robusta occurs in two locations, a southern population on K'gari and around Maryborough, and a northern population on the Atherton Tableland west of Cairns; the northern population was formerly distinguished as Agathis palmerstonii, but does not differ from the southern population and is no longer considered distinct. It is a large evergreen tree growing straight and tall to a height of 30–50 m, with smooth, scaly bark. The leaves are 5–12 cm long and 2–5 cm broad, tough and leathery in texture, with no midrib; they are arranged in opposite pairs (rarely whorls of three) on the stem. The seed cones are globose, 8–13 cm diameter, and mature in 18–20 months after pollination; they disintegrate at maturity to release the seeds. The male (pollen) cones are cylindrical, 5–10 cm long and 1-1.5 cm thick. The Queensland kauri was heavily logged in the past, and spectacular trees of prodigious size are much rarer than in pre-European times; despite this, the species as a whole is not endangered. Agathis, commonly known as kauri or dammara, is a genus of 22 species of evergreen tree. The genus is part of the ancient conifer family Araucariaceae, a group once widespread during the Jurassic and Cretaceous periods, but now largely restricted to the Southern Hemisphere except for a number of extant Malesian Agathis. Mature kauri trees have characteristically large trunks, with little or no branching below the crown. In contrast, young trees are normally conical in shape, forming a more rounded or irregularly shaped crown as they achieve maturity. The bark is smooth and light grey to grey-brown, usually peeling into irregular flakes that become thicker on more mature trees. The branch structure is often horizontal or, when larger, ascending. The lowest branches often leave circular branch scars when they detach from the lower trunk.