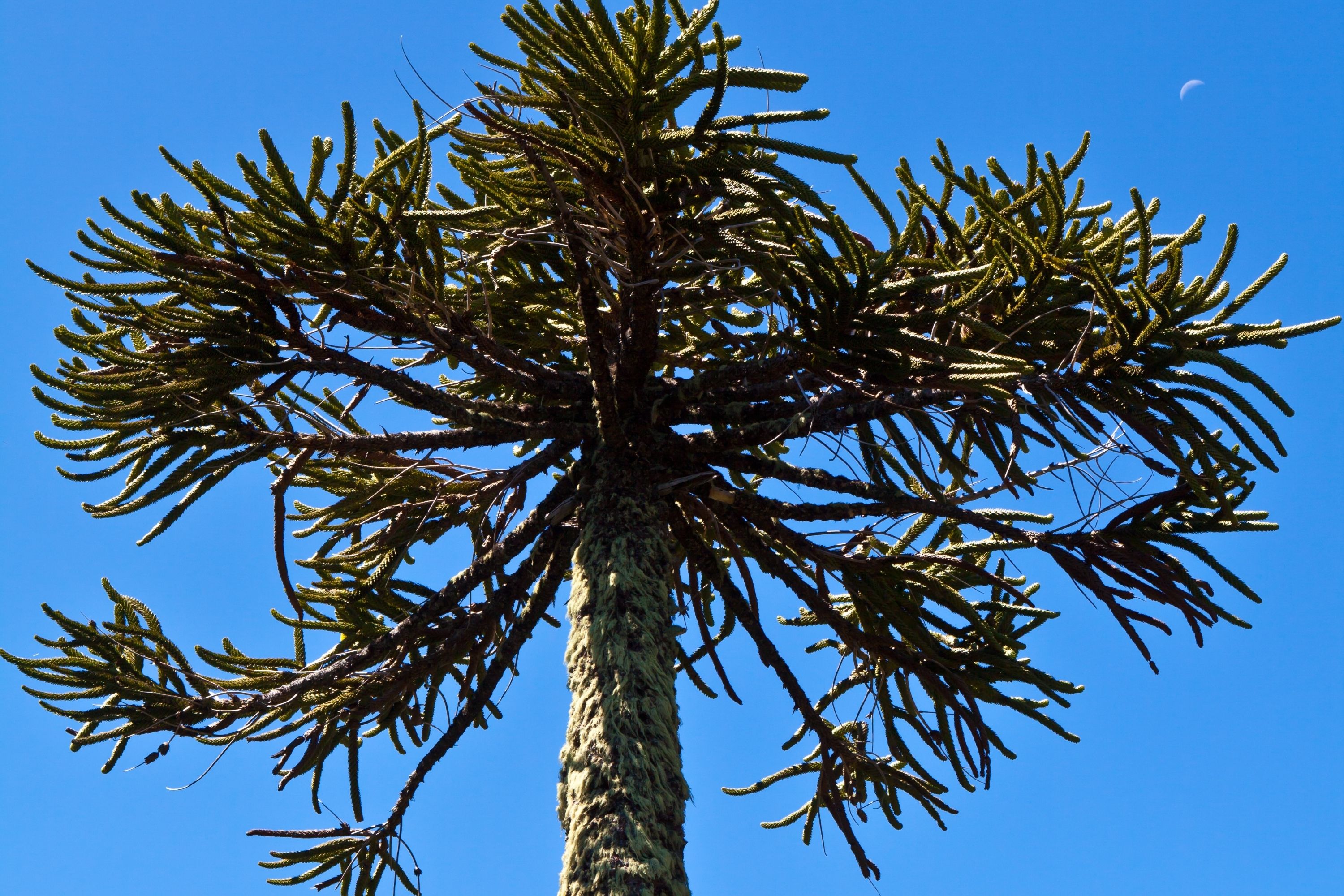 Araucaria araucana (commonly called the monkey puzzle tree, monkey tail tree, piñonero, pewen or Chilean pine) is an evergreen tree growing to 1–1.5 m (3–5 ft) in diameter and 30–40 m (100–130 ft) in height. It is native to central and southern Chile and western Argentina. Araucaria araucana is the hardiest species in the conifer genus Araucaria. Because of the prevalence of similar species in ancient prehistory, it is sometimes called a living fossil. It is also the national tree of Chile. Its conservation status was changed to Endangered by the IUCN in 2013 due to the dwindling population caused by logging, forest fires, and grazing. The leaves are thick, tough, and scale-like, triangular, 3–4 cm (1+1⁄4–1+1⁄2 in) long, 1–3 cm (1⁄2–1+1⁄4 in) broad at the base, and with sharp edges and tips. According to Lusk, the leaves have an average lifespan of 24 years and so cover most of the tree except for the older branches. It is usually dioecious, with the male and female cones on separate trees, though occasional individuals bear cones of both sexes. The male (pollen) cones are oblong and cucumber-shaped, 4 cm (1+1⁄2 in) long at first, expanding to 8–12 cm (3–4+1⁄2 in) long by 5–6 cm (2–2+1⁄2 in) broad at pollen release. It is wind pollinated. The female (seed) cones, which mature in autumn about 18 months after pollination, are globose, large, 12–20 cm (4+1⁄2–8 in) in diameter, and hold about 200 seeds. The cones disintegrate at maturity to release the 3–4 cm (1+1⁄4–1+1⁄2 in) long nut-like seeds. The thick bark of Araucaria araucana may be an adaptation to wildfire. The tree’s native habitat is the lower slopes of the Chilean and Argentine south-central Andes, typically above 1,000 m (3,300 ft). Juvenile trees exhibit a broadly pyramidal or conical habit which naturally develops into the distinctive umbrella form of mature specimens as the tree ages. It prefers well-drained, slightly acidic, volcanic soil, but will tolerate almost any soil type provided it drains well.