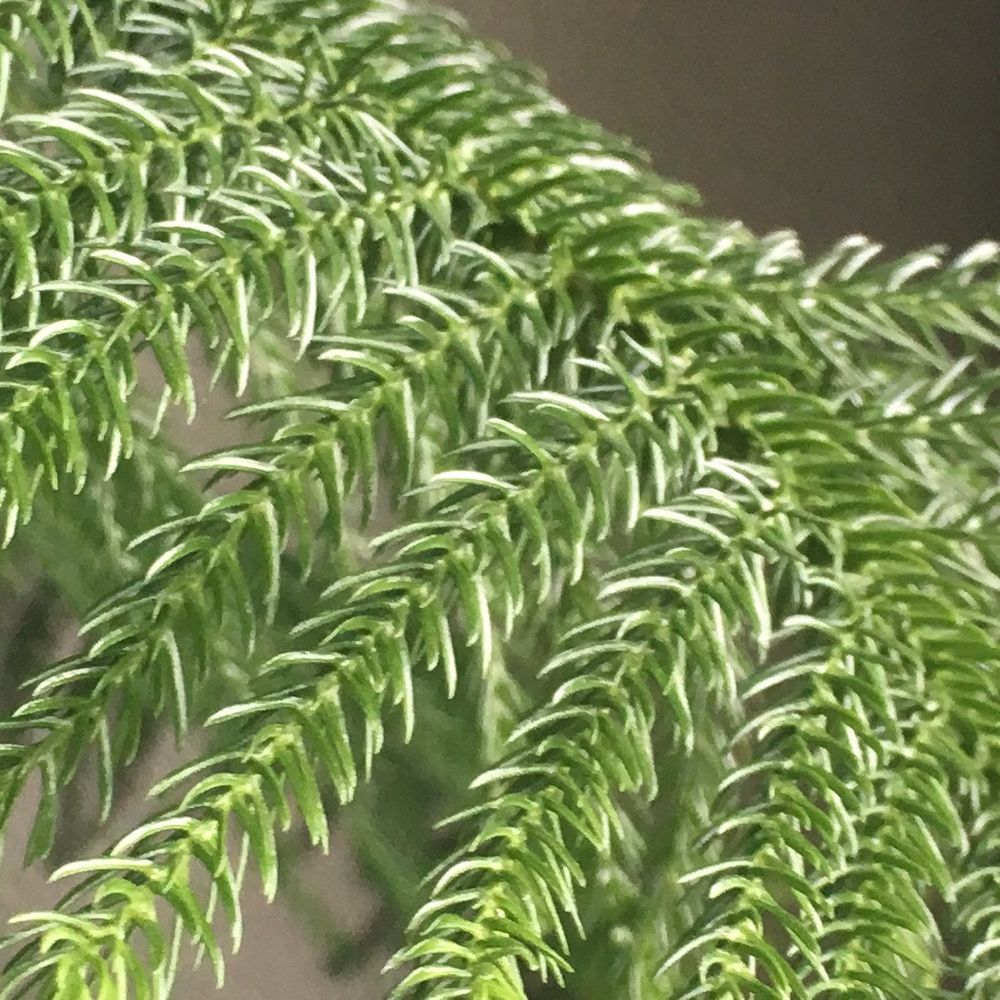 Araucaria heterophylla, commonly known as Norfolk Island Pine, is a coniferous tree species native to the Norfolk Island, a small island in the Pacific Ocean. It is a member of the Araucariaceae family and is closely related to the Kauri Pine and Monkey Puzzle Tree. Botanical Characteristics: Araucaria heterophylla is an evergreen tree that can reach up to 165 feet (50 meters) in height, with a diameter of about 6-10 feet (2-3 meters). The tree has a straight trunk, with symmetrical branches and branchlets arranged in a regular pattern, giving the tree a distinctive, triangular shape. The leaves are needle-like and grow in spirals along the branches, they are typically about 2-3 inches (5-7 cm) long, and are bright green in color. The male and female cones are found on separate trees, with the male cones being smaller and located near the ends of the branches, and the female cones being larger and located on the lower branches. Cultivation and Uses: Araucaria heterophylla is widely cultivated as an ornamental tree in temperate regions around the world, including Europe, North America, and Australia. It is popular for its distinctive shape and symmetrical growth habit, and is commonly used as a Christmas tree in many countries. It is also widely used as a container plant and as bonsai specimens. The wood of the Norfolk Island Pine is soft and light, making it suitable for use in the production of paper, furniture, and construction materials. The tree is also an important source of food for the native wildlife on the Norfolk Island, including the endemic parakeet and numerous species of insects. Growing Conditions: Araucaria heterophylla is relatively easy to grow, and is relatively fast-growing for a coniferous tree. It prefers well-drained, fertile soil and is tolerant of a wide range of soils, including those that are poorly drained. It is also tolerant of salt spray, making it suitable for coastal gardens. The tree prefers full sun, but can also grow in partial shade. It is important to protect young trees from strong winds, as they are relatively sensitive to wind damage. In conclusion, the Norfolk Island Pine is a versatile and attractive coniferous tree species that is widely cultivated for its ornamental value, as well as its wood and other uses. It is relatively easy to grow and is well-suited to a range of soils and growing conditions, making it a popular choice for gardeners and landscapers around the world. Araucaria genus Araucaria are mainly large trees with a massive erect stem, reaching a height of 5-80 metres (16-262 ft). The horizontal, spreading branches grow in whorls and are covered with leathery or needle-like leaves. In some species, the leaves are narrow, awl-shaped and lanceolate, barely overlapping each other; in others they are broad and flat, and overlap broadly. The trees are mostly dioecious, with male and female cones found on separate trees, though occasional individuals are monoecious or change sex with time. The female cones, usually high on the top of the tree, are globose, and vary in size among species from 7 to 25 centimetres (2.8 to 9.8 in) diameter. They contain 80-200 large edible seeds, similar to pine nuts, though larger. The male cones are smaller, 4-10 cm (1.6-3.9 in) long, and narrow to broad cylindrical, 1.5-5.0 cm (0.6-2.0 in) broad. The genus is familiar to many people as the genus of the distinctive Chilean pine or monkey-puzzle tree (Araucaria araucana). The genus is named after the Spanish exonym Araucano ("from Arauco") applied to the Mapuches of central Chile and south-west Argentina, whose territory incorporates natural stands of this genus. The Mapuche people call it pehu-n, and consider it sacred. Some Mapuches living in the Andes name themselves Pehuenches ("people of the pehu-n") as they traditionally harvested the seeds extensively for food.No distinct vernacular name exists for the genus. Many are called "pine", although they are only distantly related to true pines, in the genus Pinus.