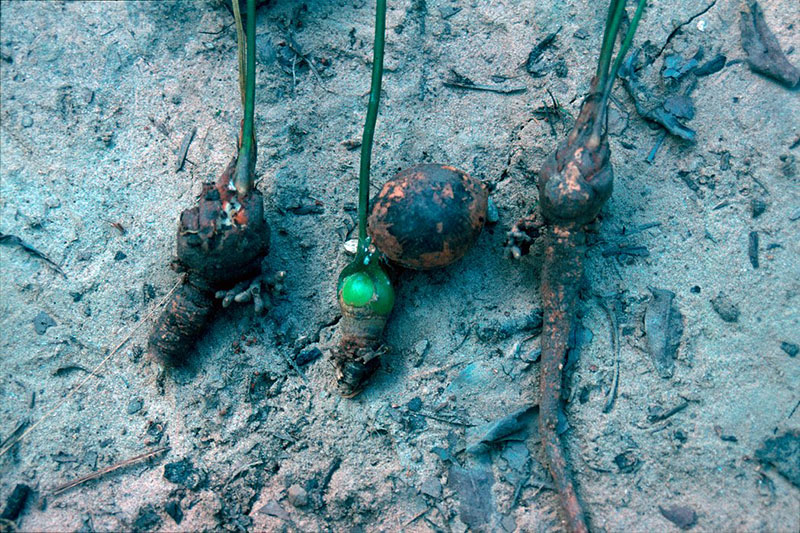 Cycas is the type genus and the only genus recognised in the family Cycadaceae. About 113 species are accepted.Cycas circinalis, a species endemic to India was the first cycad species to be described and was the type of the generic name, Cycas. The best-known Cycas species is Cycas revoluta. The Cycas is a very ancient genus of trees. The group achieved its maximum diversity in the Jurassic and Cretaceous periods, when it was distributed almost worldwide. At the end of the Cretaceous, when the non-avian dinosaurs became extinct, so did most of the cycas in the Northern Hemisphere. The genus is native to the Old World, with the species concentrated around the equatorial regions - eastern and southeastern Asia including the Philippines with 10 species (9 of which are endemic), eastern Africa (including Madagascar), northern Australia, Polynesia, and Micronesia. Australia has 26 species, while the Indo-Chinese area has about 30. India has 9 species. The northernmost species (C. revoluta) is found at 31-N in southern Japan. The southernmost (C. megacarpa) is found at 26-S in southeast Queensland. Due to the occurrence of large number of Cycas species in China and Australia, both the countries are considered as two centres of diversity of Cycas. The plants are dioecious, and the family Cycadaceae is unique among the cycads in not forming seed cones on female plants, but rather a group of leaf-like structures called megasporophylls each with seeds on the lower margins, and pollen cones or strobilus on male individuals. The caudex is cylindrical, surrounded by the persistent petiole bases. Most species form distinct branched or unbranched trunks but in some species the main trunk can be subterranean with the leaf crown appearing to arise directly from the ground. There are two types of leaves - foliage leaves and scaly leaves. The foliage leaves are pinnate (or more rarely bipinnate) and arranged spirally, with thick and hard keratinose. They are not permanent and fall off leaving back leaf-bases. The leaflets are articulated, have midrib but lack secondary veins. The scaly leaves are persistent, brown in colour and protective in function. Megasporophylls are not gathered in cones. Pollination takes place by air. Often considered a living fossil, the earliest fossils of the genus Cycas appear in the Cenozoic although Cycas-like fossils that may belong to Cycadaceae extend well into the Mesozoic. Cycas is not closely related to other genera of cycads, and phylogenetic studies have shown that Cycadaceae is the sister-group to all other extant cycads. The plant takes several years to grow, sexual reproduction takes place after 10 years of exclusive vegetative growth which occurs by bulbils arising at the base of the trunk. Cycas species are threatened worldwide and almost all the species are listed in IUCN Redlist. Cycas beddomei is the only species of the genus Cycas listed in Appendix I of CITES. Cycas rumphii and Cycas pectinata have the most widespread distribution.