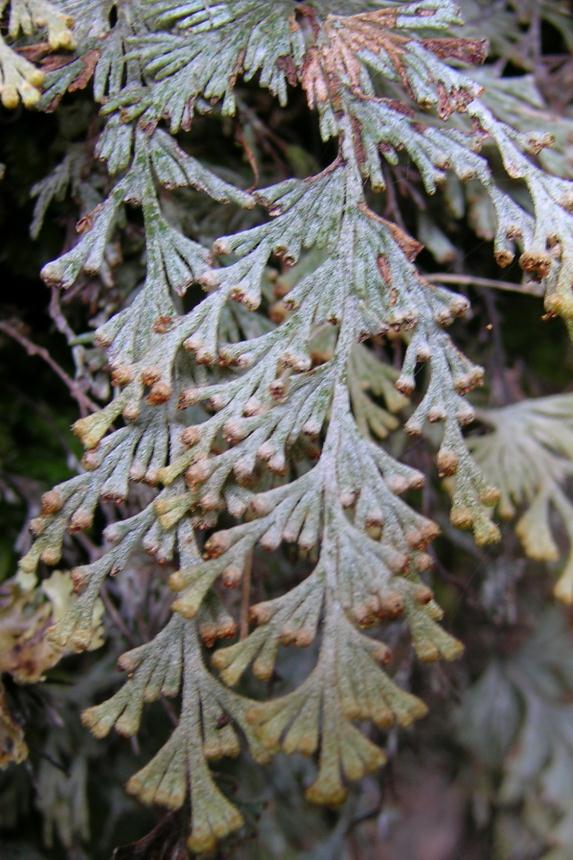 Hymenophyllum malingii is a fern of the family Hymenophyllaceae endemic to New Zealand.This species has the following characteristics: its rhizome is long and filiform; the general color of the plant is greyish-green, turning rust-colored for certain fronds; the slings, less than 20-30 centimeters long and less than 5 wide, have a limbus deeply divided two or three times; the petiole, from three to ten centimeters, reaches almost half the length of the blade; the limb reduced to only the veins bears a very abundant hairiness, characteristic of the subgenus Sphaerocionium ; the reduction of the limb to the veins alone, however, is a peculiarity in this genus and is the characteristic of this species; the hairs are divided to two-thirds of their length, in six to ten segments of hair, orthogonal to the lower part; the segments of the upper limb are almost tubular; Sori, solitary, are borne by the end of a segment; a columella, the size of the sore, bears the dense clusters of sporangia, and entirely covered by the indusium. This species, like the subgenus, has a base number of 36 chromosomes