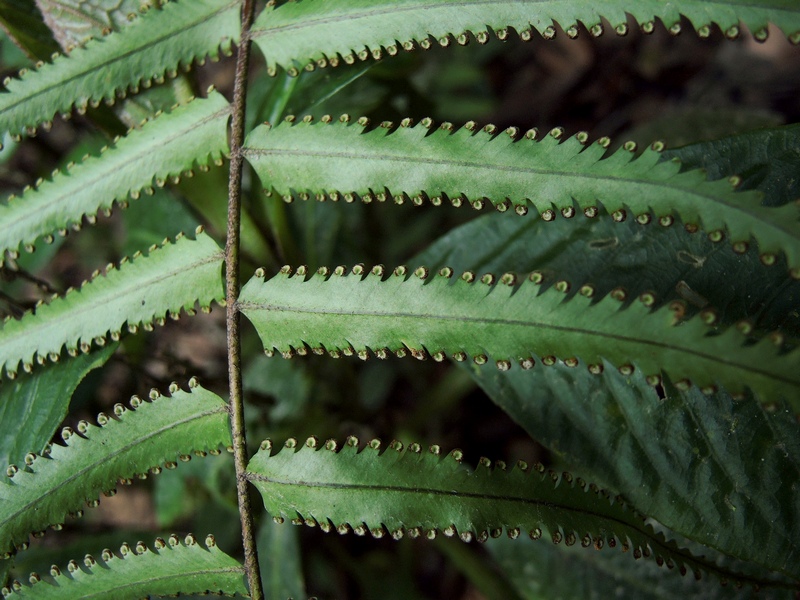 Polypodium is a genus of 75-100 species of true ferns, widely distributed throughout the world, with the highest species diversity in the tropics. The name is derived from Ancient Greek poly (----) "many" + podion (------) "little foot", on account of the foot-like appearance of the rhizome and its branches. They are commonly called polypody or rockcap fern, but for many species unique vernacular names exist.Sori, borne on the back of the leaflet, are globose and naked as in this Polypodium amorphumThey are terrestrial or epiphytic ferns, with a creeping, densely hairy or scaly rhizome bearing fronds at intervals along its length. The species differ in size and general appearance and in the character of the fronds, which are evergreen, persisting for 1-2 years, pinnate or pinnatifid (rarely simple entire), and from 10-80 cm or more long. The sori or groups of spore-cases (sporangia) are borne on the back of the frond; they are globose and naked, not covered with a membrane (indusium).Polypodies have some use in herbalism, but are today most important in horticulture where several species, hybrids, and their cultivars like Polypodium 'Green Wave' are commonly used as ornamental plants for shady locations. Polypodium have a bitter-sweet taste and are among the rather few ferns that are used in cooking; in this case as a spice e.g. for nougat.