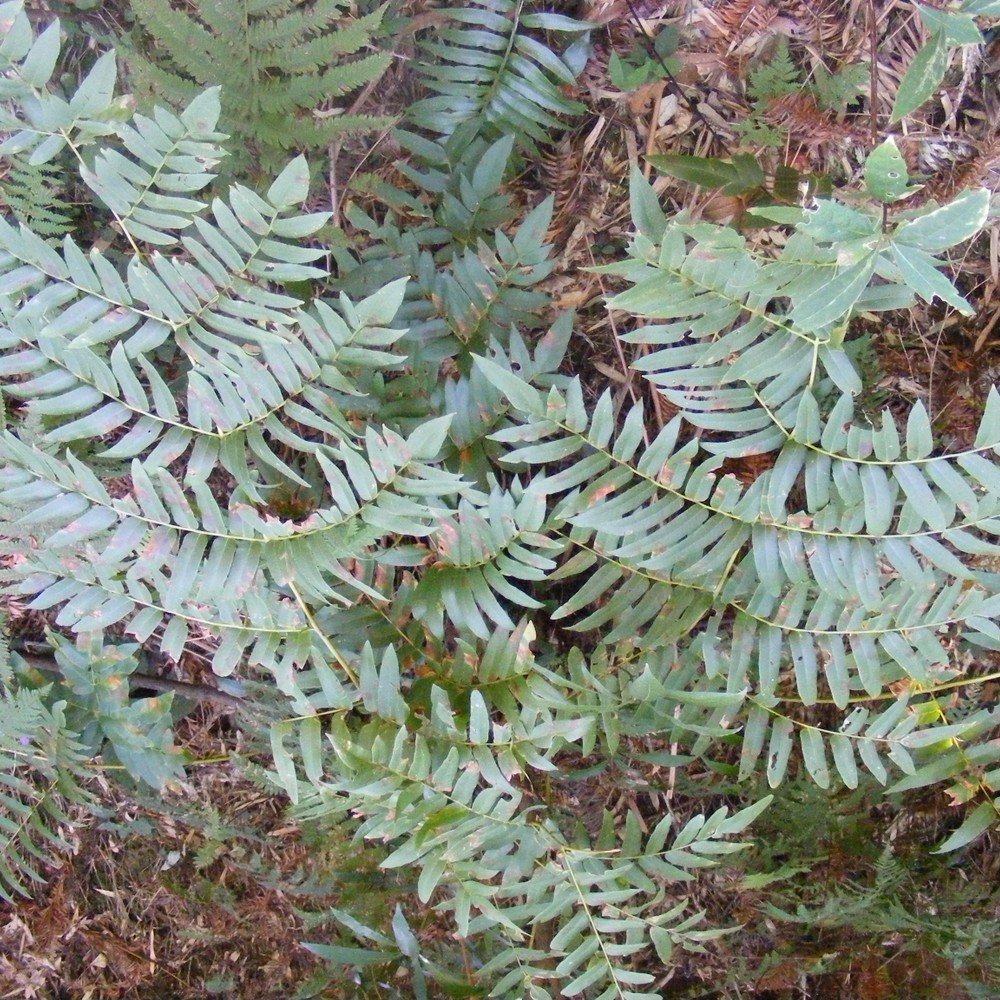 Osmunda japonica (syn. Osmunda nipponica Makino), also called Asian royal fern,is a fern in the genus Osmunda native to east Asia, including Japan, China, Korea, Taiwan, and the far east of Russia on Sakhalin. It is called gobi in Korean and zenmai in Japanese. It is a deciduous herbaceous plant which produces separate fertile and sterile fronds. The sterile fronds are spreading, up to 80–100 cm tall, bipinnate, with pinnae 20–30 cm long and pinnules 4–6 cm long and 1.5–2 cm broad; the fertile fronds are erect and shorter, 20–50 cm tall. It grows in moist woodlands and can tolerate open sunlight only if in very wet soil. Like other ferns, it has no flowers, but rather elaborate sporangia, that very superficially might suggest a flower, from which the alternative name derives. Like its relative Osmundastrum cinnamomeum (Cinnamon fern), the fertile fronds become brown-colored and contain spores. The sterile (vegetative) fronds resemble in form, another relative, Osmunda regalis (Royal fern). In some parts of China (where it is called juecai in Mandarin), Tibet and Japan (where it is called zenmai in Japanese), the young frond or fiddlehead of Osmunda japonica is used as a vegetable. In Korea too, these young shoots are commonly used to make dishes like namul. Osmunda is a genus of primarily temperate-zone ferns of family Osmundaceae. Five to ten species have been listed for this genus. Completely dimorphic fronds or pinnae (hemidimorphic), green photosynthetic sterile fronds, and non-photosynthetic spore-bearing fertile pinnae, with large, naked sporangia. Because of the large mass of sporangia that ripen uniformly at the same time to a showy golden color, the ferns look as if they are in flower, and so this genus is sometimes called the "flowering ferns". Osmunda, the type genus of the fern order, Osmundales has historically been the largest genus in the family Osmundaceae. Smith et al. (2006), who carried out the first higher-level pteridophyte classification published in the molecular phylogenetic era, described three genera in that family, namely Osmunda, Leptopteris, and Todea.The genus has also been treated historically as consisting of a number of subgroups, generally subgenera, Osmunda (3 species), Osmundastrum (2 species), and Plenasium (3–4 species). However, there was suspicion that the genus was not monophyletic.