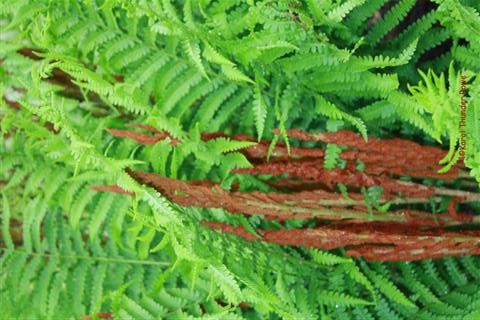 Osmunda is a genus of primarily temperate-zone ferns of family Osmundaceae. Five to ten species have been listed for this genus. Completely dimorphic fronds or pinnae (hemidimorphic), green photosynthetic sterile fronds, and non-photosynthetic spore-bearing fertile pinnae, with large, naked sporangia. Because of the large mass of sporangia that ripen uniformly at the same time to a showy golden color, the ferns look as if they are in flower, and so this genus is sometimes called the "flowering ferns". Osmunda, the type genus of the fern order, Osmundales has historically been the largest genus in the family Osmundaceae. Smith et al. (2006), who carried out the first higher-level pteridophyte classification published in the molecular phylogenetic era, described three genera in that family, namely Osmunda, Leptopteris, and Todea.The genus has also been treated historically as consisting of a number of subgroups, generally subgenera, Osmunda (3 species), Osmundastrum (2 species), and Plenasium (3–4 species). However, there was suspicion that the genus was not monophyletic The publication of a detailed phylogeny of the family by Metzgar et al. in 2008 showed that Osmunda as circumscribed was paraphyletic and that Osmunda cinnamomea, despite its morphological similarity to Osmunda claytoniana, was sister to the rest of the family, and resurrected the segregate genus Osmundastrum, by elevating it from subgenus, to contain it and render Osmunda monophyletic. Their phylogeny of Osmundaceae genera is shown in the following cladogram Osmunda species are used as food plants by the larvae of some Lepidoptera species including the engrailed. One of the species, the cinnamon fern (Osmundastrum cinnamomeum) forms huge clonal colonies in swamp areas. These ferns form massive rootstocks with densely matted, wiry roots. This root mass is an excellent substrate for many epiphytal plants. They are often harvested as osmundine and used horticulturally, especially in propagating and growing orchids.

How many invasive plant species are in the world?
News coming your way
The biggest news about our planet delivered to you each day