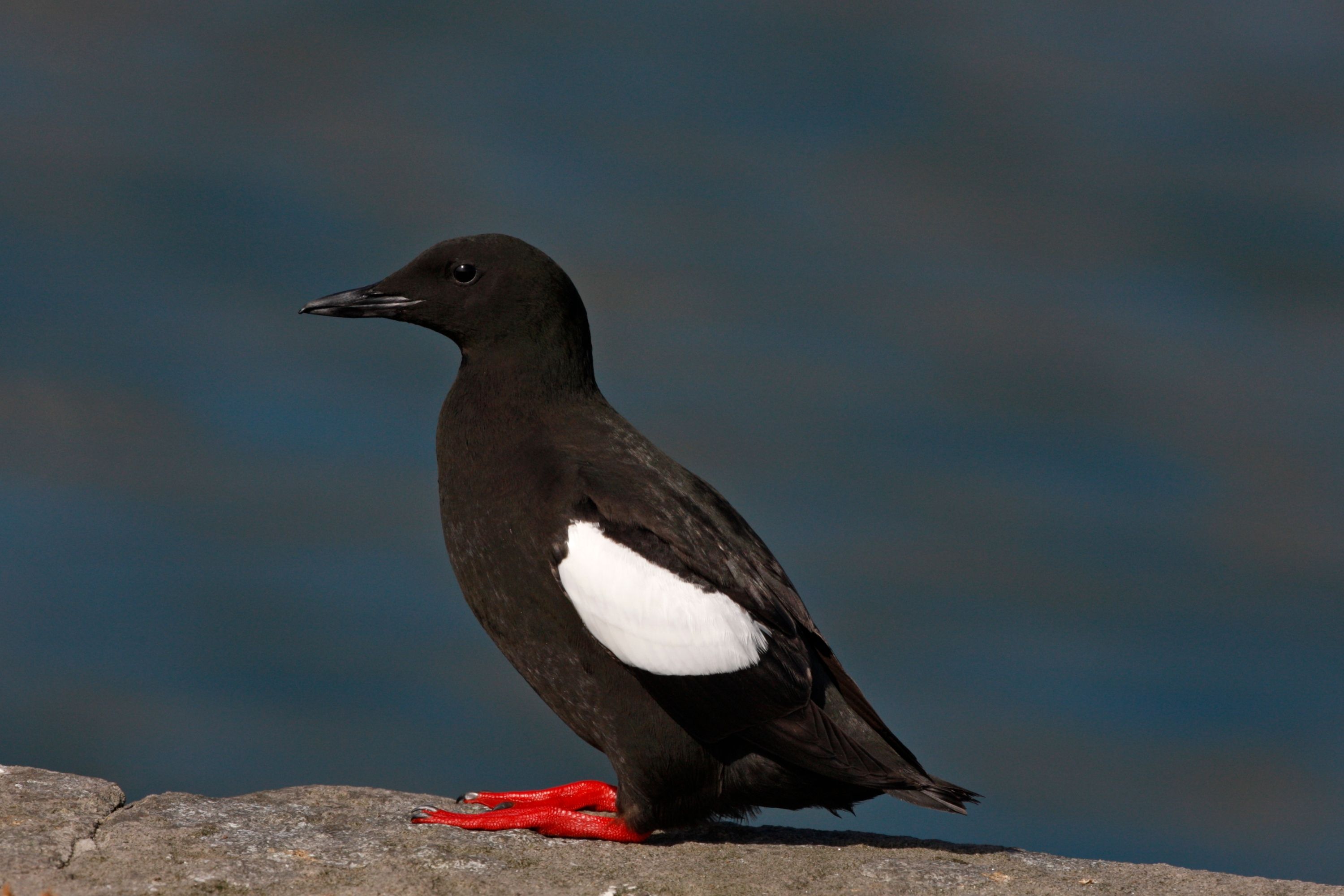 The black guillemot or tystie (Cepphus grylle) is a medium-sized seabird of the alcid family, Alcidae, native throughout northern Atlantic coasts and eastern North American coasts. It is resident in much of its range, but large populations from the high arctic migrate southwards in winter. The bird can be seen in and around its breeding habitat of rocky shores, cliffs and islands in single or smalls groups of pairs. They feed mainly by diving towards the sea floor feeding on fish, crustaceans or other benthic invertebrates. They are listed on the IUCN red list as a species of least concern. Both sexes have very similar appearances with black plumage and a large white patch on the upper side of their wings in summer. The bill is also black, being rather long and slender, while the feet are coral-red. In winter adult underparts are white and the upperparts are a pale grey with the back and shoulders exhibiting barred light grey and white patterning. The birds breed in solitary pairs or small groups during their breeding season starting in late February and early May. Breeding pairs will typically lay 2-egg clutches and raise 2 chicks to fledging. Incubation typically lasts 28 to 32 days, once hatched chicks receive care from the parents until they fledge aged 30 – 40 days. Once fledged chicks are totally independent and by age three or four years they will begin to re-join their natal colony. The genus name Cepphus is from Ancient Greek kepphos, a pale waterbird mentioned by Greek authors including Aristotle. The species name grylle was the local dialect name for this bird in Gotland at the time of Linnaeus's visit there in 1741. The English word "guillemot" is from French guillemot probably derived from Guillaume, "William". The Black guillemot is a medium-sized bird with adults normally 30 to 32 centimetres (12 to 12+1⁄2 inches) in length and with wingspans of 52 to 58 cm (20+1⁄2 to 23 in). The bodyweight can range from 300 to 460 grams (10+1⁄2 to 16 ounces). Adults have both summer and winter plumage and there is no sexual difference in this that can be identified in the field. The English common name “Black Guillemot” references their strikingly black breeding summer plumage which is totally black except for a large white patch on the upper side of their wings. During the summer plumage, their legs, feet and inside of the mouth are all a bright coral-red, and their beak is a black.