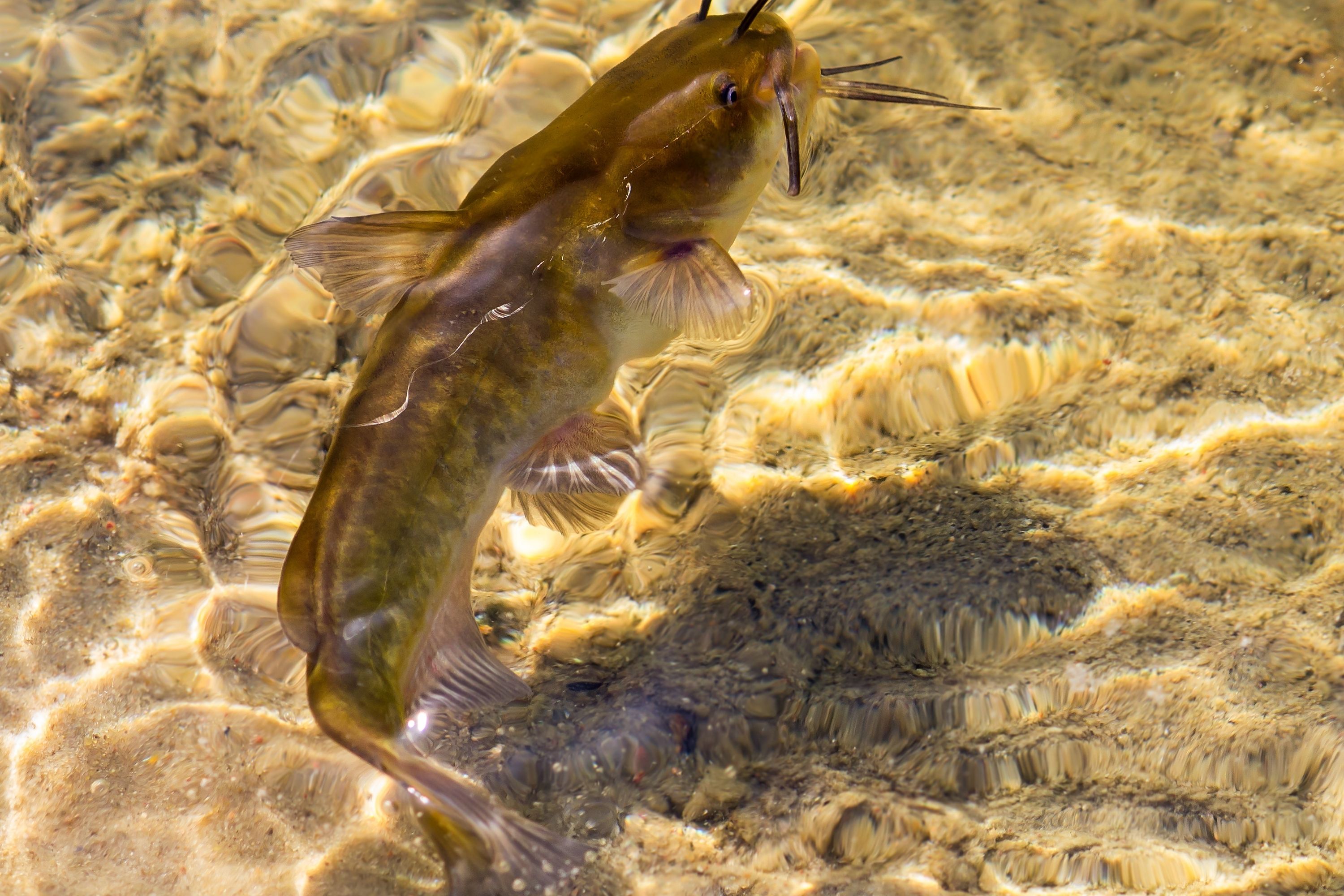 The brown bullhead (Ameiurus nebulosus) is a fish of the family Ictaluridae that is widely distributed in North America. It is a species of bullhead catfish and is similar to the black bullhead (Ameiurus melas) and yellow bullhead (Ameiurus natalis). It was originally described as Pimelodus nebulosus by Charles Alexandre Lesueur in 1819, and is also referred to as Ictalurus nebulosus. The brown bullhead is also widely known as the mud pout, "horned pout", "hornpout", or simply "mud cat", a name also used with the other bullhead species. The brown bullhead is important as a clan symbol of the Ojibwe people. In their tradition, the bullhead or wawaazisii is one of six beings that came out of the sea to form the original clans. The native range of the brown bullhead is in the Atlantic and Gulf Slope drainages. More specifically, it is found from Nova Scotia and New Brunswick to Mobile Bay, Alabama, and in the Great Lakes, Hudson Bay, and Mississippi River basins (from Quebec to Saskatchewan, south to Louisiana, and west to Texas). However, there is evidence that the brown bullhead was historically absent from the Gulf Coast west of the Apalachicola River and east of the Mississippi River. The species is also abundant in many regions as a result of stocking for food or sport. These locations include Georgia,Alabama, Arizona, Arkansas, California, Colorado, Hawaii, Idaho, Kansas, Kentucky, Louisiana, Maine, Missouri, Nebraska, Nevada, New Hampshire, New Mexico, Ohio, Oklahoma, Oregon, Virginia, and Washington. Brown bullheads are a social non-migratory species that lives the majority of their lives in schools. The brown bullhead thrives in a variety of habitats, including lakes, ponds, and slow-moving streams with low oxygen or muddy conditions. In many areas of the United States, brown bullheads are opportunistic bottom feeders. The species has few natural predators and is not popular with fishermen, so it has thrived. Catfish are found in a variety of habitats, from lakes or murky ponds to drainage ditches. They are scarce during the day, but come out at night to feed, searching the bottom of a lake or river for food. They eat insects, leeches, snails, fish, clams, and many plants. They are also known to eat corn, which can be used as bait. Similarly to other catfish, they spawn only after the temperature of the water has reached 80 °F (27 °C) in June and July. However, cooler temperatures are required before brown bullheads will spawn in the northern US.