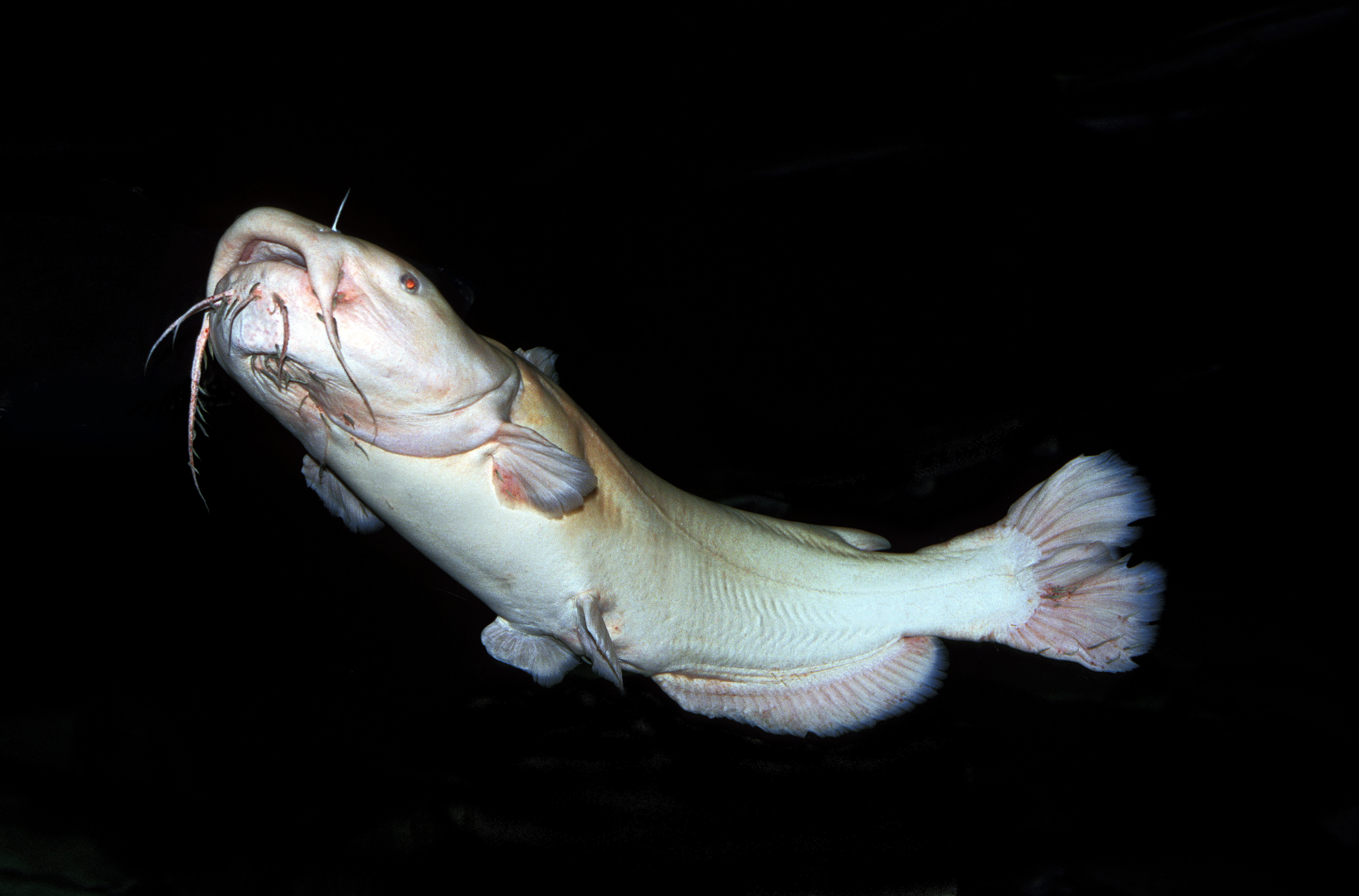 The flathead catfish (Pylodictis olivaris), also called by several common names including mudcat or shovelhead cat, is a large species of North American freshwater catfish in the family Ictaluridae. It is the only species of the genus Pylodictis. Ranging from the lower Great Lakes region to northern Mexico, it has been widely introduced and is an invasive species in some areas. The closest living relative of the flathead catfish is the much smaller widemouth blindcat, Satan eurystomus. The flathead catfish is also known as the yellow cat, mud cat, Johnnie cat, goujon, appaluchion, opelousas, pied cat and Mississippi cat. The flathead catfish grows to a length of 155 cm (61 in) and may weigh up to 56 kg (123 lb), making it the second-largest North American catfish (after the blue catfish, Ictalurus furcatus). The average length is about 25-46 in (64-117 cm). Its maximum recorded lifespan is 24 years. Males are mature from 16 cm (6.3 in) and 4 years of age, while females mature from 18 cm (7.1 in) and 5 years of age, but may mature as late as 10 years. The world angling record flathead catfish was caught May 14, 1998, from Elk City Reservoir, Kansas, and weighed 123 lb 9 oz (56.0 kg). However, a record from 1982, caught by "other methods", shows that the flathead catfish would be North Americas longest species of catfish, after a specimen pulled from the Arkansas River measured 175 cm (69 in.) and weighed 63.45 kg (139 lbs and 14oz.). The native range of the flathead catfish includes a broad area west of the Appalachian Mountains encompassing large rivers of the Mississippi, Missouri, and Ohio basins. The range extends as far north as Canada, as far west as Texas, and south to the Gulf of Mexico including northeastern Mexico. The flathead catfish cannot live in full-strength seawater (which is about 35 parts per thousand or about 35 grams of salt per liter of water), but it can survive in 10 ppt for a while and thrive in up to about 5 ppt. The flathead catfish prefers live prey. It is a voracious carnivore and feeds primarily on fishes, insects, annelid worms, and crustaceans. It also feeds on other small catfish and almost anything that moves and makes vibration. They are known to eat crayfish, American gizzard shad (Dorosoma cepedianum), insects and larvae, channel catfish (Ictalurus punctatus), drum (Aplodinotus grunniens), other flatheads, green sunfish (Lepomis cyanellus), and carp.