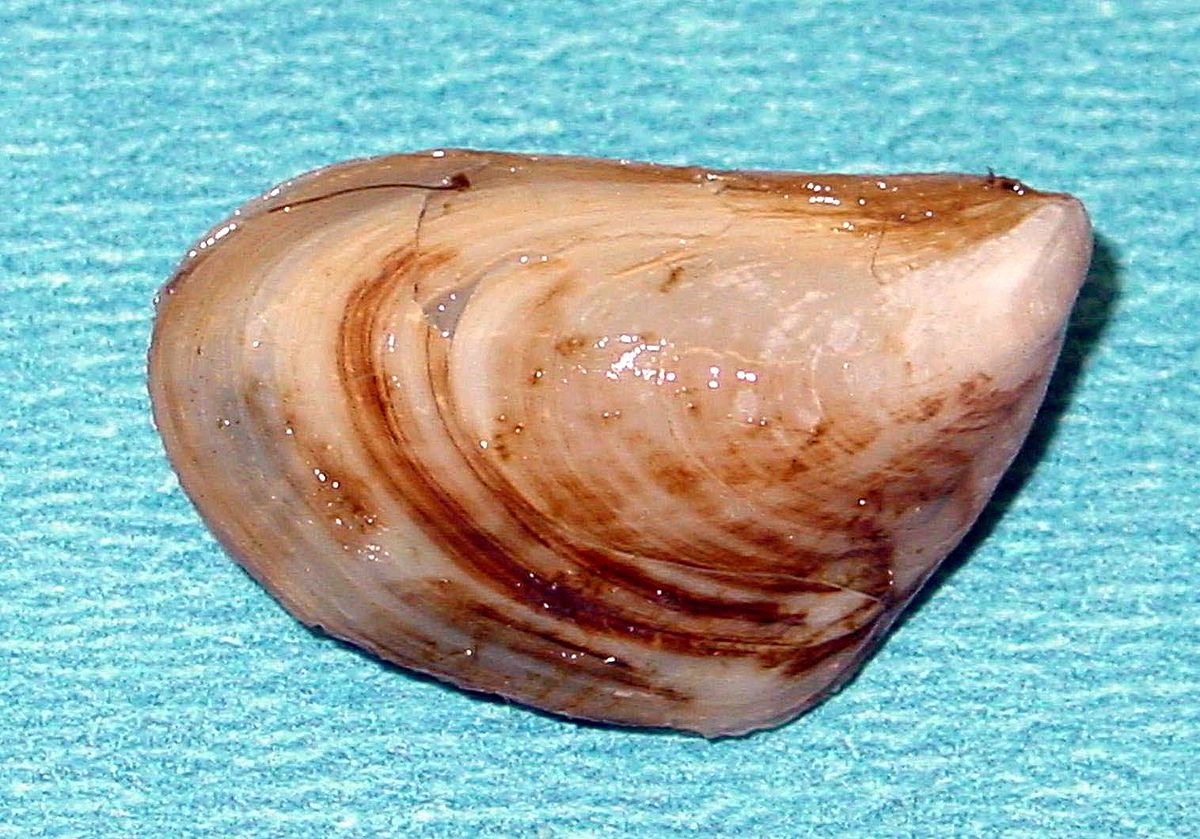 The quagga mussel (Dreissena rostriformis, also known as Dreissena bugensis or Dreissena rostriformis bugensis) is a species (or subspecies) of freshwater mussel, an aquatic bivalve mollusk in the family Dreissenidae. It has an average lifespan of 3 to 5 years. The species is indigenous to the Dnieper River drainage of Ukraine, and is named after the quagga, an extinct subspecies of African zebra, possibly because, like the quagga, its stripes fade out towards the ventral side. The quagga mussel is currently of major concern in the Great Lakes of North America as an invasive species brought by overseas shippers that use the Saint Lawrence Seaway. The quagga mussel shell is generally black, yellow, and/or zig-zagged. However, a large range of shell morphologies is seen, including a distinct morph in Lake Erie that is pale or completely white. The shell has a rounded carina and a convex ventral side. The quagga mussel resembles the zebra mussel, just as its namesake (quagga) resembles the zebra. The quagga mussel shell can be distinguished from the zebra mussel shell because it is paler toward the end of the hinge. It is also slightly larger than the zebra mussel, about 20 mm (0.8 in) wide, roughly about the size of an adult human's thumbnail. The quagga mussel is a filter feeder; it uses its cilia to pull water into its shell cavity through an incurrent siphon, where the desirable particulate matter is removed. Each adult mussel is capable of filtering one liter or more of water each day, where they remove phytoplankton, zooplankton, algae, and even their own veligers. Any undesirable particulate matter is bound with mucus, known as pseudofeces, and ejected out the incurrent siphon. The particle-free water is then discharged out the excurrent siphon. The quagga mussel is a prolific breeder, possibly contributing to its spread and abundance. Dreissena spp. are dioecious (either male or female) with external fertilization. A fully mature female mussel is capable of producing up to one million eggs per year. After fertilization, pelagic microscopic larvae, or veligers, develop within a few days and these veligers soon acquire minute bivalve shells. Free-swimming veligers drift with the currents for 3 to 4 weeks feeding by their hair-like cilia while trying to locate suitable substrata to settle and secure byssal threads. Mortality in this transitional stage from planktonic veliger to settled juvenile may exceed 99%.