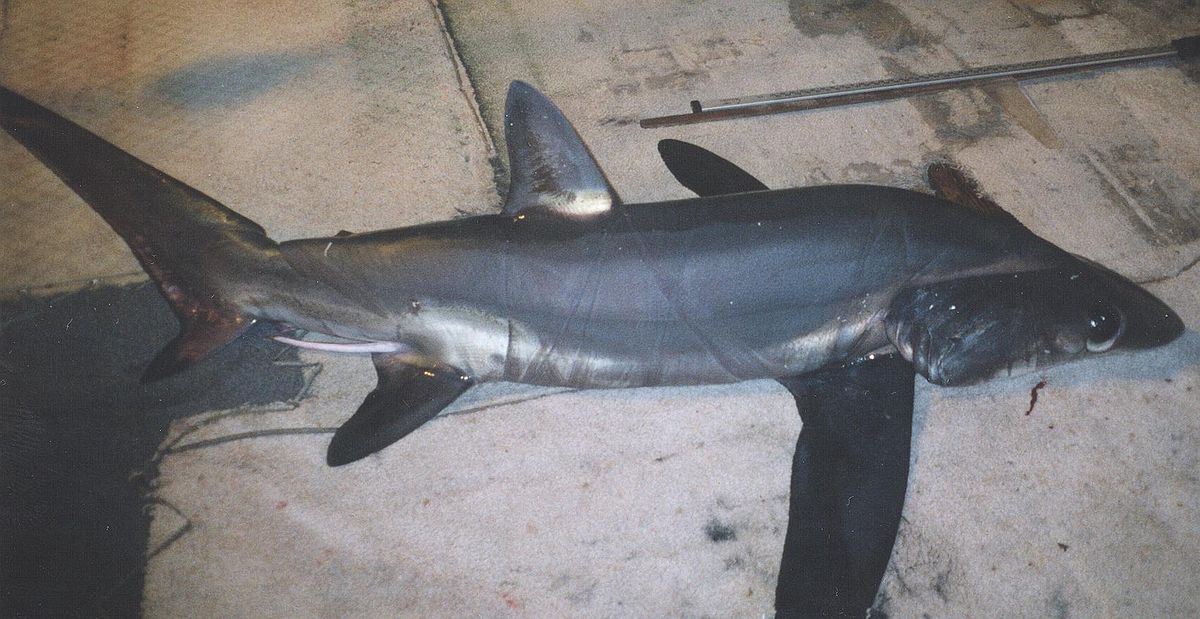 Measuring up to 4.9 m in length,weighing 364 kg (size of the largest specimen so far fished,captured in New Zealand in February 1981 ): most of the specimens,however,remain below 4 m in length,for a weight of 160 kg.The body appears fusiform and very hydrodynamic,with a rather stocky and bulbous muzzle in which there is a mouth with small teeth with a single cusp.The teeth are arranged in rows of 19-24 in the maxilla and 20-24 in the mandible.The eyes are very large (up to 10 cm in diameter) and are slightly taller than wide: the eye socket extends below the eye,allowing the animal to look up rather than down.Above the eyes passes a furrow that also passes over the gill arches,giving the impression to the observer that the head is crossed by a large scar.Between the eyes and the brain there is a wonderful networkof blood vessels that allows the animal a very fast exchange of blood and heat.This feature is an adaptation to the lifestyle of the animal,which leads him to rise and fall daily in the water column,above and below the thermocline : the wonderful network allows him not to be negatively affected at eye level (fundamental for the search of food) of the continuous pressure swings and especially of temperature (even between 15-16 ° C between the deep and the superficial waters).Like all alopidae,also in the fox octopus shark there is the characteristic caudal finextremely long heterocerca (almost half of the total length of the animal),which in this species,however,appears less thin and filiform.The pectoral fins are sickle-shaped but have a rounded tip,similar to the Alopias pelagicus : the first dorsal fin is placed quite far behind the congeners (almost at the level of the pelvic fins ) and there is the partially free base in rear position.