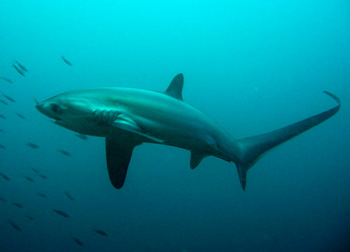 The common thresher (Alopias vulpinus),also known by many names such as Atlantic thresher,big-eye thresher,fox shark,green thresher,swingletail,slasher,swiveltail,thintail thresher,whip-tailed shark and Zorro thresher shark,is the largest species of thresher shark,family Alopiidae,reaching some 6 m (20 ft) in length.About half of its length consists of the elongated upper lobe of its caudal fin.With a streamlined body,short pointed snout,and modestly sized eyes,the common thresher resembles (and has often been confused with) the pelagic thresher (A.pelagicus).It can be distinguished from the latter species by the white of its belly extending in a band over the bases of its pectoral fins.The common thresher is distributed worldwide in tropical and temperate waters,though it prefers cooler temperatures.It can be found both close to shore and in the open ocean,from the surface to a depth of 550 m (1,800 ft).It is seasonally migratory and spends summers at lower latitudes.The long tail of the common thresher,the source of many fanciful tales through history,is used in a whip-like fashion to deliver incapacitating blows to its prey.This species feeds mainly on small schooling forage fishes such as herrings and anchovies.It is a fast,strong swimmer that has been known to leap clear of the water,and possesses physiological adaptations that allow it to maintain an internal body temperature warmer than that of the surrounding sea water.The common thresher has an aplacental viviparous mode of reproduction,with oophagous embryos that feed on undeveloped eggs ovulated by their mother.Females typically give birth to four pups at a time,following a gestation period of nine months.Despite its size,the common thresher is minimally dangerous to humans due to its relatively small teeth and timid disposition.It is highly valued by commercial fishers for its meat,fins,hide,and liver oil;large numbers are taken by longline and gillnet fisheries throughout its range.This shark is also esteemed by recreational anglers for the exceptional fight it offers on hook-and-line.The common thresher has a low rate of reproduction and cannot withstand heavy fishing pressure for long,a case in point being the rapid collapse of the thresher shark fishery off California in the 1980s.With commercial exploitation increasing in many parts of the world,the International Union for Conservation of Nature has assessed this species as vulnerable.