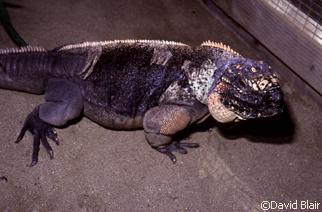 Cyclura cychlura figginsi NatureServe Explorer Species Reports -- NatureServe Explorer is a source for authoritative conservation information on more than 50,000 plants, animals and ecological communtities of the U.S and Canada. NatureServe Explorer provides in-depth information on rare and endangered species, but includes common plants and animals too. NatureServe Explorer is a product of NatureServe in collaboration with the Natural Heritage Network. ITIS Reports -- ITIS (the Integrated Taxonomic Information System) is a source for authoritative taxonomic information on plants, animals, fungi, and microbes of North America and the world. FWS Digital Media Library -- The U.S. Fish and Wildlife Service's National Digital Library is a searchable collection of selected images, historical artifacts, audio clips, publications, and video. 'Cyclura cychlura figginsi, known by the common name of guana and sometimes called the Exuma Island iguana in the international literature, is a subspecies of the northern rock iguana, C. cychlura, that is found on the Exuma island chain in the Bahamas with an estimated wild population of 1,300 animals in 2004, it has been listed on the IUCN Red List as critically endangered. In the late 19th century the American naturalist Charles Johnson Maynard mentioned that populations of iguanas still existed on the small island Bitter Guana Cay, being the namesake of the toponym, and he also mentioned that he thought it was possible this population could be named as a new species. In 1923 Thomas Barbour obliged. In 1975 Albert Schwartz and Richard Thomas subsumed it as a subspecies of C. cychlura. In their 1977 monograph on Cyclura, Schwartz

No recovery information is available for the Exuma Island iguana.
Back to full archive