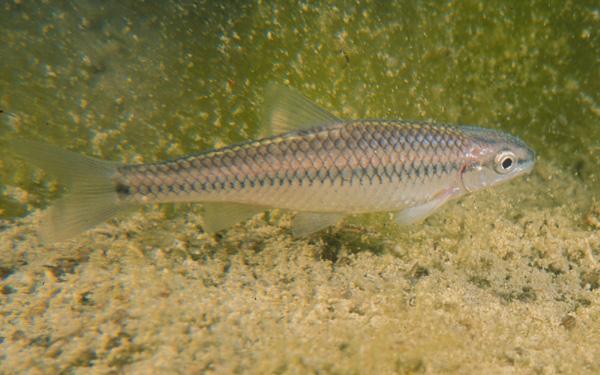 Dionda diaboli NatureServe Explorer Species Reports -- NatureServe Explorer is a source for authoritative conservation information on more than 50,000 plants, animals and ecological communtities of the U.S and Canada. NatureServe Explorer provides in-depth information on rare and endangered species, but includes common plants and animals too. NatureServe Explorer is a product of NatureServe in collaboration with the Natural Heritage Network. ITIS Reports -- ITIS (the Integrated Taxonomic Information System) is a source for authoritative taxonomic information on plants, animals, fungi, and microbes of North America and the world. FWS Digital Media Library -- The U.S. Fish and Wildlife Service's National Digital Library is a searchable collection of selected images, historical artifacts, audio clips, publications, and video. The Devils River minnow is a species of ray-finned fish in the family Cyprinidae. The minnow coexists with other closely related species and other cyprinids in the range of northern Mexico and southern Texas. The Devils River minnow has its dorsal and dorsal lateral scales darkly outlined, double dashes along the lateral line, and a long dark lateral stripe through its snout and eye. It can also be characterized by a black spot on its wedge shaped caudal fin and a cross hatched appearance on its body.[5] The eye shape is round during its larval stage and can be compared to other minnow species larvae that have more of an oval shape.[2] Adults can range from sizes of 25 to 55 millimeters, or approximately one to two inches.[5] The distinct shape of the intestines also distinguishes it from other herbivore minnows.[2] The intestines of the Devil's River minnow are more multi-looped and convoluted in the larval and juvenile stages compared to the same structures in minnows that eat insects, which are generally straight and turn into an s-shape during the larval and juvenile stages