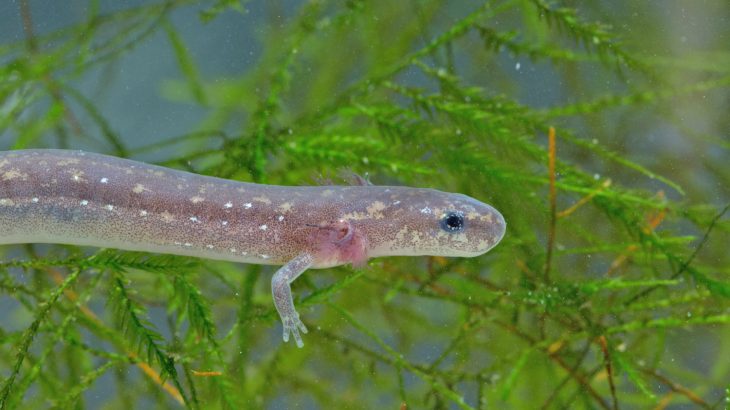 The San Marcos salamander (Eurycea nana) is a small species of aquatic, lungless salamander native to the United States, endemic to Spring Lake and a small region of the headwaters of the San Marcos River near Aquarena Springs, in Hays County, Texas. It is one to two inches long, with a slender body and external gills, and is a reddish-brown in color. The San Marcos salamander has been federally listed as a threatened species since 1980. Due to its extremely limited geographic range, it is threatened by a number of things, but primarily from the contamination of ground water sources and heavy dependence of Central Texas cities upon the Edwards Aquifer for water. NatureServe Explorer Species Reports -- NatureServe Explorer is a source for authoritative conservation information on more than 50,000 plants, animals and ecological communtities of the U.S and Canada. NatureServe Explorer provides in-depth information on rare and endangered species, but includes common plants and animals too. NatureServe Explorer is a product of NatureServe in collaboration with the Natural Heritage Network. ITIS Reports -- ITIS (the Integrated Taxonomic Information System) is a source for authoritative taxonomic information on plants, animals, fungi, and microbes of North America and the world. FWS Digital Media Library -- The U.S. Fish and Wildlife Service's National Digital Library is a searchable collection of selected images, historical artifacts, audio clips, publications, and video. Image credit: FWS