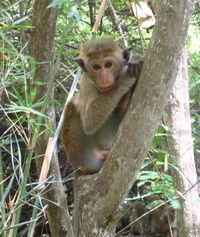 Macaca sinica NatureServe Explorer Species Reports -- NatureServe Explorer is a source for authoritative conservation information on more than 50,000 plants, animals and ecological communtities of the U.S and Canada. NatureServe Explorer provides in-depth information on rare and endangered species, but includes common plants and animals too. NatureServe Explorer is a product of NatureServe in collaboration with the Natural Heritage Network. ITIS Reports -- ITIS (the Integrated Taxonomic Information System) is a source for authoritative taxonomic information on plants, animals, fungi, and microbes of North America and the world. The toque macaque is a reddish-brown-coloured Old World monkey endemic to Sri Lanka, where it is known as the rilewa or rilawa,. Its name refers to the whorl of hair at the crown of the head, compared to a brimless toque cap. FWS Digital Media Library -- The U.S. Fish and Wildlife Service's National Digital Library is a searchable collection of selected images, historical artifacts, audio clips, publications, and video. The social status is highly structured in toque macaques, where there are dominance hierarchies among both males and females. A troop may consist of as few as 8 to as many as 40. When the troop becomes too large, social tension and aggression towards each other arise, causing some individuals to flee from the troop. This is noticeable in adults and sub adults, where a troop may consist largely of females. Newly appointed alpha males also show aggressiveness towards females, causing the females to flee. There are sightings of severe fights between individuals of the same troop and some get heavy wounds to cheeks, eyes, and sometimes broken arms

No recovery information is available for the Toque macaque.
Back to full archive