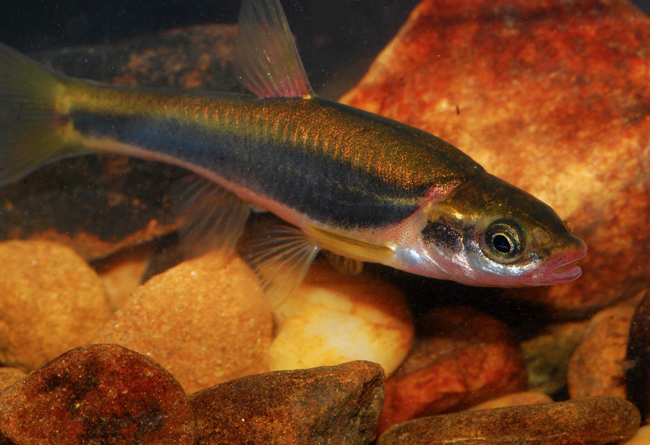 NatureServe Explorer Species Reports -- NatureServe Explorer is a source for authoritative conservation information on more than 50,000 plants, animals and ecological communtities of the U.S and Canada. NatureServe Explorer provides in-depth information on rare and endangered species, but includes common plants and animals too. NatureServe Explorer is a product of NatureServe in collaboration with the Natural Heritage Network. ITIS Reports -- ITIS (the Integrated Taxonomic Information System) is a source for authoritative taxonomic information on plants, animals, fungi, and microbes of North America and the world. FWS Digital Media Library -- The U.S. Fish and Wildlife Service's National Digital Library is a searchable collection of selected images, historical artifacts, audio clips, publications, and video. The blackside dace (Chrosomus cumberlandensis) is a species of ray-finned fish in the family Cyprinidae. It is endemic to the Cumberland River drainage in Kentucky and Tennessee as well as the Powell River drainage in Virginia in the United States. It is a federally listed threatened species. The species is threatened by the loss and degradation of its habitat. The rocky riverbed substrates in which it spawns are degraded by erosion and sedimentation, which are increased by human activities such as runoff pipes from septic tanks, and trash being dumped into streams. Several populations have been extirpated by these processes. In 2007 a large scale die-off of aquatic life, including blackside dace, occurred in the Acorn Fork in Kentucky. Scientists from the U.S. Geological Survey and the U.S. Fish and Wildlife Service concluded that the most likely cause was a spill of hydraulic fracturing fluid from nearby natural gas wells. The results of a joint study indicated that the spill caused a spike in acidity, as well as toxic concentrations of heavy metals. Photo credit: Price Sewell

No critical habitat rules have been published for the Blackside dace.
Back to full archive