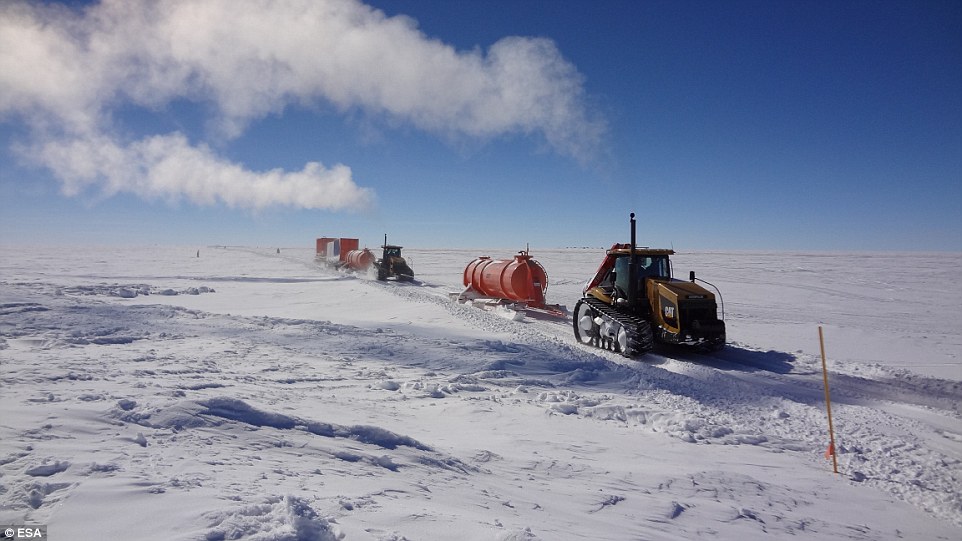 It’s an incredible Antarctic journey. A collection of 24-ton tractors, each carrying and towing still more tons of food, fuel, equipment, and more, sets out from the edge of Antarctica.

Traveling through frigid temperatures, they trek inland hundreds of miles to deliver their supplies to scientists stationed at the Concordia Research Station.

The scientists and suppliers who undertake the journeys call them “raids,” and the most recent raid had a special driver.

Dr. Didier Schmitt works for the European Space Agency, and is also an author and columnist. He joined a raid that headed to Concordia on Christmas Day.

He wrote about the trip on the ESA’s blog, comparing it to the “Mad Max” movies. The space agency monitored the convoy’s progress with satellites.

“As the Astrolabe ship was stuck in the ice, large supply items could not be unloaded so we will be the smallest raid ever,” he wrote – though he was quick to point out that the 300-meter convoy would still be carrying 330 tons of supplies.

“No passengers are allowed. Every person is in charge of a vehicle. I only had a few hours for a test-drive the day before … While Father Christmas delivers gifts with reindeers we do it with mammoth-tractors weighing 22 tonnes,” Schmitt wrote.

Though the trip was only 10 days long, that was plenty of time for the convoy to run into trouble. Even though it is summer in the Southern Hemisphere, the “raiders” faced snow storms.

To help prevent problems, drivers are selected with redundancy in mind. Everyone knows their job, as well as someone else’s. They also went through stringent medical testing.

The conditions only got tougher the closer they got to the research station.

“We are in the middle of nowhere with 24 hour sunlight and a sky that has very unusual features,” Schmitt wrote, four days into the 10-day incredible journey.

The European Space Agency occasionally sends staff members on the Antarctic “raids.” Each year, an ESA doctor joins the staff at Concordia to conduct experiments with the crew. The isolation and weather offer a sort of alien landscape right on Earth.

Research on the continent also supports Earth observation research, which is also done by satellite, the agency said. The extreme light conditions – 24-hour darkness in the winter, and 24-hour sunlight in the summer – allows ESA doctors to study how humans cope without natural day and night cycles.