35-million-year-old army ant is the oldest on record • Earth.com 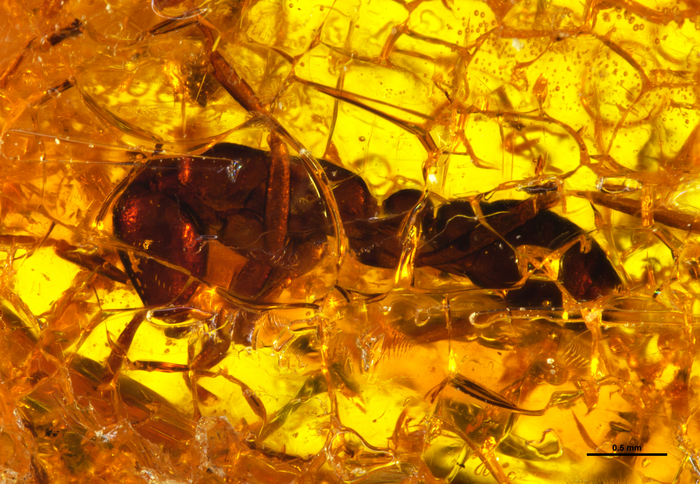 35-million-year-old army ant is the oldest on record

Army ants are well-known for their ferocious predatory behavior. They march along in a column of several hundred thousand individuals, consuming any prey that finds itself in their path. Today, there are over 300 different species of army ants, found mostly in tropical and subtropical terrestrial ecosystems in the southern U.S., in Central and South America, in Africa south of the Sahara, and in parts of Asia. But no army ants are found today in Europe.

This is why the discovery of a fossilized army ant in a block of amber from the Baltic region in northern Europe has surprised researchers from the New Jersey Institute of Technology and the Colorado State University. Not only is this the only record of army ants having ever occurred in Europe, but it is also the oldest specimen of an army ant ever found, being dated at around 35 million years.

“We didn’t think they were in Europe,” said PhD candidate Christine Sosiak from the New Jersey Institute of Technology. “It’s actually completely unheard of to find them there. And yet here we have this [European] army ant, from so far back in history!”

Despite the number of different species of army ants, and the fact that they occur on most of the world’s continents, fossilized specimens are remarkably rare. In fact, only one other fossil of an army ant exists, one found in the Caribbean and dated at around 16 million years. The current finding indicates that army ants did occur in Europe, where they are conspicuous by their absence today.

Details of the Baltic amber specimen are presented in a paper published in the journal Biology Letters. The fossil is roughly 3 mm in length and has no eyes. This is common in army ant workers, some of which may live underground, and all of which forage and move around using chemical cues, particularly pheromones. The eyeless specimen has been named Dissimulodorylus perseus, after the mythical Greek hero Perseus who famously defeated Medusa with the limited use of sight.

The specimen was discovered by accident while lead author Sosiak was investigating the collection of amber-embedded ants, stored in the Museum of Comparative Zoology at Harvard University since the 1930s. She came across a specimen labelled as a member of the common Platythyrea genus, but soon realized this identification was incorrect.

“The museum houses hundreds of drawers full of insect fossils, but I happened to come across a tiny specimen labeled as a common type of ant, while gathering data for another project,” said Sosiak. “Once I put the ant under the microscope, I immediately realized the label was inaccurate … I thought, this is something really different.”

Using photography and microscopic CT scans, Sosiak and her colleagues created high-resolution images and a 3D model of the small, fossilized ant, and realized that it had no eyes, sharply pointed jaws, a single waist segment and a large gland that would have secreted protective fluids necessary for living underground. These characteristics indicated that the ant was indeed a type of army ant, closely related to species in the genus Dorylus that are currently found inhabiting Africa and Southern Asia.

“This was an incredibly lucky find. Because this ant was probably subterranean like most army ants today, it was much less likely to come into contact with tree resin that forms such fossils,” said Sosiak. “We have a very small window into the history of life on our planet, and unusual fossils such as this provide fresh insight.”

Army ants live in large, mobile colonies that forage by raiding terrestrial habitats in swarms. A raiding party may number up to several hundred thousand workers, all of which co-ordinate their behavior to capture prey. The queens are wingless and capable of laying millions of eggs each month. When the larvae are a few days old, worker ants carry the offspring along as the colony moves from one foraging area to the next. Their behavior is so unusual in ant terms that it has been named ‘army ant syndrome.’

“Army ant workers participate in raiding swarms, hunting other insects and even vertebrates. Because these army ants are blind, they use chemical communication to stay coordinated with one another to take down large prey,” explained Sosiak. “This worker may have strayed too far from its fellow hunters and into sticky tree resin, which eventually solidified and encased the ant as we see it today.”

“This amber would have been excavated around or before the 1930s, so to now learn it contained a rare army ant is surprising enough, much less one that demonstrates these ants roamed Europe,” said study senior author Professor Phillip Barden. “From everything we know about army ants living today, there’s no hint of such extinct diversity … With this fossil now out of obscurity, we’ve gained a rare paleontological porthole into the history of these unique predators.”

“At the time the fossil formed, Europe was hotter and wetter than it is today and may have provided an ideal habitat for ancient army ants. Europe underwent several cooling cycles over tens of millions of years since the Eocene, however, which may have been inhospitable to these tropical-adapted species.”

The researchers say the ant fossil brings to light previously unknown army ant lineages that would have existed across Continental Europe before undergoing extinction in the past 50 million years.

“The discovery is the first physical evidence of the army ant syndrome in the Eocene, establishing that hallmarks of these specialized predators were in place even before the ancestors of certain army ants like Dorylus,” said Professor Barden.