African mole-rats are insensitive to pain thanks to a special gene • Earth.com 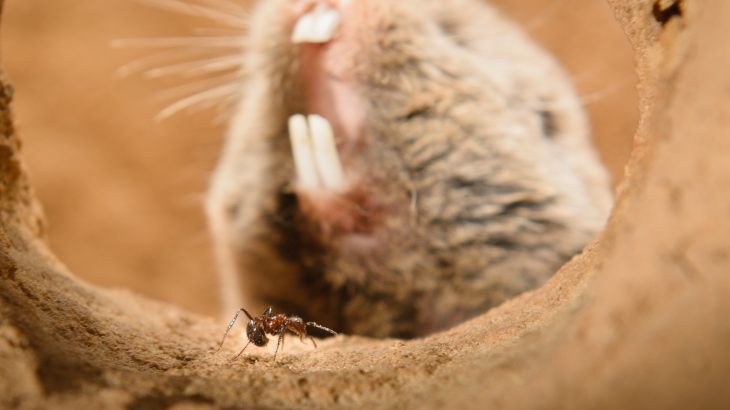 African mole-rats have an unbelievable tolerance for pain which allows them to burrow next to venomous ants and eat roots that other animals would avoid.

In a new study, researchers from the Max Delbrück Center for Molecular Medicine (MDC) and the University of Pretoria in South Africa isolated the genes that are directly responsible for pain insensitivity in mole rats.

Published in the journal Science, the results help show the underlying genetic mechanisms that make some mole rats less sensitive to pain.

“The insights provided by our studies of these animals should help, among other things, in the development of new pain-relieving drugs,” said Gary Lewin who first discovered the extent of mole-rat pain tolerance back in 2008.

For the study, Lewin and colleagues tested pain tolerance in naked mole-rats and eight related species of mole rats.

The mole rats were exposed to diluted hydrochloric acid, capsaicin, and allyl isothiocyanate (AITC). Each substance is known to cause a burning sensation when it touches the skin of humans and mammals.

Mole rats are naturally exposed to some of these substances which are found in the roots and tubers they forage for and eat.

The researchers injected the substance into the paws of the rats, and three mole-rat species were unphased by the hydrochloric acid. Two of the species in the study did feel the capsaicin solution but only one species, the highveld mole-rat, was unaffected by the AITC.

“This was a thrilling finding for us,” says Lewin. “AITC attacks amino acids in the body and can thus destroy proteins. That is why all the other species we know avoid coming into contact with the substance.”

After establishing which species were impervious to which substances, the researchers collected sensory tissue from the spinal cord and dorsal root ganglia from all nine species in the study.

The genes contain the blueprint for the ion channels TRPA1 and NaV1.7, which are known for their role in pain sensitivity and perception.

Substances like AITC activate these channels, and in highveld rats, the TRPA1 channel is completely switched off.

The researchers also found that pain sensitivity could be “turned on” again in the mole-rats.

“From the thousands of genes we were looking at, we had obviously found the very gene responsible for the highveld mole-rat’s remarkable pain resistance,” said Lewin.