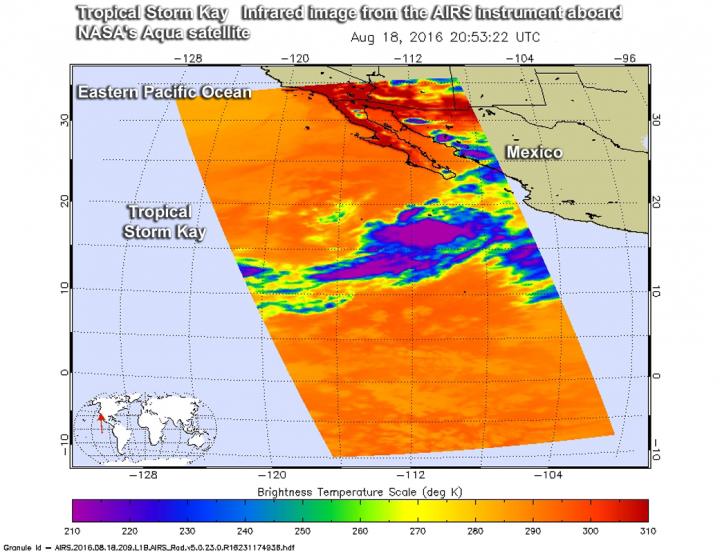 NASA’s Aqua satellite passed over tropical cyclone Kay as it was designated a depression in the Eastern Pacific and identified areas of strong convection. That strong uplift of air continued to generate more powerful storms in the system and on Aug. 19 it strengthened into a tropical storm.

The Atmospheric Infrared Sounder or AIRS instrument that flies aboard NASA’s Aqua satellite analyzed Kay as it was classified as a depression on Aug. 18 at 4:53 p.m. EDT (2053 UTC).

AIRS looked at Tropical Depression Kay in infrared light, gathering temperature data of the system’s clouds. Coldest cloud top temperatures appeared south of the center at that time where some temperatures of the strongest storms exceeded minus 63 degrees Fahrenheit (minus 53 degrees Celsius). Storms with temperatures that cold are high in the troposphere and NASA research has shown they have the ability to generate heavy rain.

By 5 a.m. EDT on Friday, Aug. 19, Kay had strengthened into a tropical storm and became the eleventh named tropical cyclone of the eastern Pacific Ocean hurricane season.

At that time the National Hurricane Center (NHC) said the center of Tropical Storm Kay was located near 18.4 degrees north latitude and 110.9 degrees west longitude. That puts the center of Kay about 315 miles (510 km) south-southwest of the southern tip of Baja California, Mexico, and just 30 miles (45 km) south-southeast of Socorro Island.

NHC said Kay was moving toward the northwest near 7 mph (11 kph) and is expected to turn toward the north-northwest with a decrease in forward speed. Maximum sustained winds have increased to near 40 mph (65 kph) and no significant change in strength is forecast during the next day or so.

Kay is forecast to move to the northwest and once it is parallel to the southern tip of Baja California, it is forecast to weaken to a depression and turn away from land and head west into the Eastern Pacific.