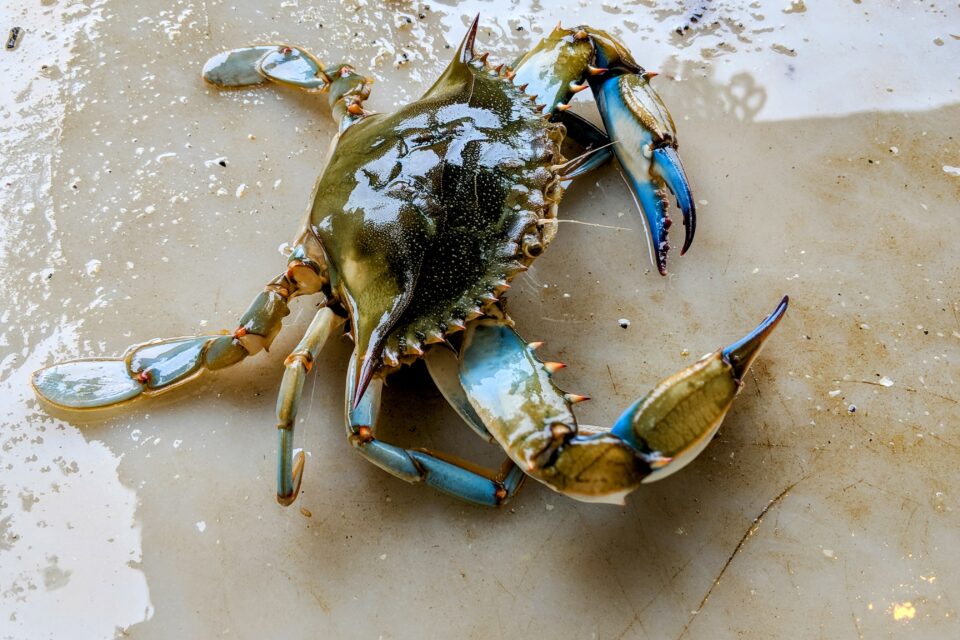 Salt marshes along the U.S. East and Gulf coasts are ecosystems that burst with life. Several species of crabs make their homes in this seemingly inhospitable habitat that is covered with water half the time and exposed to the terrestrial elements the rest of the time. For Dr. David Johnson, an ecologist at William & Mary’s Virginia Institute of Marine Science, these salt marshes have provided opportunities for fascinating research over the past 20 years. However, while doing research in a Virginia salt marsh at low tide last September, he and his colleagues saw something they’d never seen before.

In a paper set to be published in September in the journal Ecology, Johnson records that he noticed a blue crab, Callinectes sapidus, lying in a water-filled hollow in the mud, long after the tide had receded. Blue crabs are aquatic predators and have adaptations that enable them to swim and capture their prey underwater, not crawl around in the air on an exposed mud flat. Johnson supposed that the blue crab had miscalculated and was forced to shelter in the hollow until the tide returned and it could access its subtidal habitat again.

However, as he watched, he saw the blue crab dart out of its hollow and ambush a fiddler crab (Minuca pugnax) that was passing by. The blue crab retreated hastily into its muddy hollow and proceeded to eat the fiddler crab. Johnson then noticed numerous large claws of deceased male fiddler crabs littering the edges of several other water-filled hollows nearby. He and his colleagues had discovered the unusual behavior of an aquatic predator leaving the water in order to hunt.

“It was amazing because here was an aquatic predator – one that lives, eats, breathes, and breeds under water – feeding out of the water,” said Johnson. “It was like crocodiles ambushing wildebeests in Africa.”

Johnson and colleagues – VIMS PhD student Serina Wittyngham; VIMS Laboratory and Research Associate Leah Scott; and Dr. Cora Baird of the University of Virginia – believe these ambush-style attacks from pits at low tide are the first ever recorded for the blue crab or any other swimming crab, save for an earlier anecdotal account from Dr. Richard Heard of the University of Southern Mississippi. The blue crab’s genus name Callinectes, Greek for “beautiful swimmer,” attests to its aquatic nature.

“It was really hot – 95 degrees – and the tide wasn’t going to return for another three hours,” said Johnson. “But this aquatic crab had figured out a way to feed at low tide: dig shallow pits that fill with water and wait for prey to come to you. One crab was 70 meters away from the shoreline. That’s 800 body lengths. It’d be like if I dove a mile underwater and hid behind a rock to ambush fish that swam by.”

Both biologists and wary fiddler crabs have long known that blue crabs enter the salt marsh ecosystem to feed when the tide is high. During this time, fiddler crabs usually hide in their burrows to avoid becoming prey. But at low tide, when the mud flats are exposed, the habitat becomes the domain of the fiddler crabs because there are no aquatic predators to disturb them from feeding on the local detritus and algae. Or that is what the biologists thought.

“Blue crabs have been known to dash a few feet onto land to snatch fiddler crabs before returning to the water to dismember and eat them,” says Johnson, “But the behavior we saw was different. Blue crabs were not chasing their prey on land; they were waiting on land for their prey to come to them. It’d be like if you went to an Italian restaurant and were suddenly dragged under the table by a giant octopus.”

In order to find out how common this blue crab behavior was, and whether it was a successful strategy, Johnson returned to the same marsh two weeks later to quantify blue crab densities and sizes, and to assess the number of ambush attacks. He also obtained 37 hours of video footage that recorded what happened on the mud flat in his absence.

The data showed that blue crabs occurred at a density of between 0 and 0,6 per square meter of salt marsh. Most of the blue crabs present (83 percent) were juveniles, and the water-filled hollows were pretty much the size of a crab, indicating that crabs were probably excavating their own hollows. This was corroborated by video footage showing the crabs scooping mud out with their claws. But the blue crabs were not loyal to their pit and would move into an empty one – or a water-filled footprint – and even evict a neighbouring blue crab if its muddy patch looked more suitable.

Out of the 33 attacks captured on 37 h of video, 11 (33 percent) were successful. That’s three times as efficient as a polar bear and about the same success rate as a domestic tabby. Mostly, a blue crab attacked a fiddler crab that walked in front of it, but could also ambush those that walked along side, or even to the rear. Johnson estimated that a blue crab would chase its prey up to 5 cm away from the pit if the initial ambush was unsuccessful.

When blue crabs were nestled unbecomingly in water-filled hollows, their muddy covering and motionless waiting disguised them both to their potential prey and to passing predators, such as gulls, herons and egrets. “A laughing gull, a known blue-crab predator, walked within centimeters of a blue crab in a pit, but didn’t appear to notice it,” said Johnson.

The scientists also plan to explore another tantalizing observation from their initial fieldwork, which was actually focused on yet another crustacean, the purple marsh crab Sesarma reticulatum. “Sesarma creates denuded areas in the salt marsh by grazing on cordgrass,” said Johnson. He thinks this more open landscape may in turn help the blue crabs by making it easier for them to dig pits and chase down their fiddler crab prey. Initial measurements support his hypothesis: the researchers found almost twice as many blue crabs in grazed areas than in areas with plants, and higher fiddler crab densities as well.

The discovery that Callinectes feeds in salt marshes during low tide suggests these environments are more important to blue crabs than previously thought. “Our observations underscore how vital salt marshes are to blue crab production and the blue crab fishery,” said Johnson.

He also thinks the blue crab’s feeding strategy provides a mechanism that allows nutrients and energy to flow between salt marshes and their adjacent estuaries. “Blue crabs feeding in salt marshes at low tide offer a fascinating opportunity to study how predator behavior can affect the movement of energy from one ecosystem to another,” said Johnson. “Just like crocodiles link the river to the savanna, and grizzlies carry the energy of salmon into the forests of the Pacific Northwest, blue crabs connect the salt marsh to the estuary.”