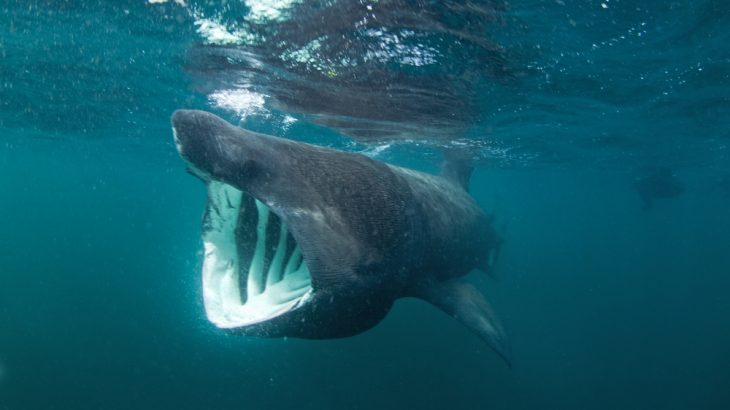 Basking sharks aren’t known for their speed or aggression. The gentle sharks spend much of their time, in fact, swimming around slowly, mouths gaping wide as they feed on small sea creatures.

Appearances can be deceiving. When it comes time to breach the ocean’s surface, basking sharks can match the speed, height and grace of their terrifying great white cousins.

“The impressive turn of speed that we found basking sharks exhibit shows how much we are yet to learn about marine animals – even the largest, most conspicuous species have surprises in store, if we’re willing to look,” Dr. Nick Payne told the Daily Mail.

Payne and his colleagues at Trinity College Dublin captured a group of massive basking sharks breaching the sea’s surface off the coast of Malin Head, Ireland recently. They used the footage to calculate the sharks’ speed as they leapt out of the water.

They also managed to attach a recording device to one the sharks so that they could monitor its speed and movement.

Turns out, basking sharks are hiding some killer skills.

The sharks were able to reach speeds of 5 meters per second, faster than an Olympic swimmer. They were also able to leap out of the water with such force that they could sail nearly a meter and a half above the surface before diving back in. The swimming speed and height are on par with those reached by great white sharks.

The finding has surprised scientists. Basking sharks generally grow to between 20 and 26 feet long, although some have topped 30 feet.

Like whale sharks – the only fish larger than them – they are mostly harmless to humans and have a reputation for being relatively passive.

“This finding does not mean that basking sharks are secretly fierce predators tearing round at high speed; they are still gentle giants munching away happily on zooplankton,” Dr. Jonathan Houghton of Queen’s University Belfast told the Mail. “It simply shows there is far more to these sharks than the huge swimming sieves we are so familiar with. It’s a bit like discovering cows are as fast as wolves.”