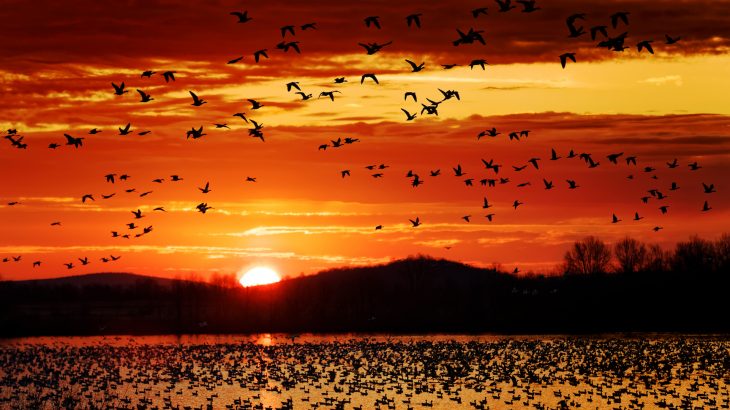 As the autumn season begins, more and more birds will begin to be making their annual migrations. September is a peak month for bird migrations and billions of birds will soon be flocking to the skies to begin their journey.

Researchers from the University of Oxford and Cornell University developed a new bird migration forecast model that could help with bird conservation and predict major bird migrations as soon as seven days beforehand.

These journeys, although critical for the birds, are not easy. It’s a taxing flight and human activities have only made it worse. City lights can distract birds or they can end up crashing into tall buildings, cell towers and power lines as urban areas expand, and loss of habitats for the birds means fewer feeding stops along the way.

Sometimes when the birds reach their destination, they are too tired to mate or take longer to restore their energy and mating is put off until later, leaving fewer resources for the young.

Having a way to predict migrations and identify regions where major populations of birds are expected could help improve conservation efforts and make the journey less perilous.

Then, the team trained a machine learning computer model to predict bird migrations around the US based on atmospheric conditions. The model was able to explain eighty percent of variation in bird migration intensity. The researchers were also able to project nightly migratory movements across the country.

“We used 12 variables to model the distribution of migratory birds across the continent,” said Van Doren. “Temperature was the most important variable. Migration intensity was greatest on warm nights, probably because warm temperatures generally bring favorable winds and the emergence of leaves and insects.

Bird forecasts based on this research have been available to the public for some time and the forecasts, which are found on the website birdcast.info, are updated every six months. The forecasts also project bird migration movements up to three days in advance.

“The capacity to forecast where and when birds are likely to be flying is instrumental for conservation goals,” said  Kyle Horton, a co-author of the study. “Radars have been illuminating the movement of birds for nearly 75 years — there are still integral discoveries to be made. With migration coming into full swing, we’re excited to deliver autumn forecasts for the first time.”