Birds in springtime: How to catch birds migrating and raising their young • Earth.com 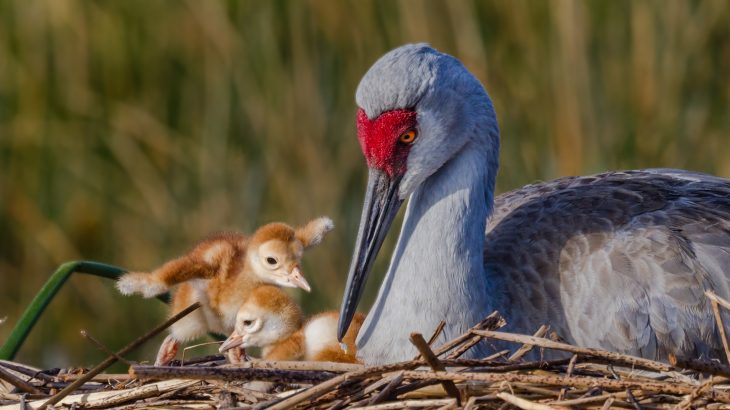 Birds in springtime: How to catch birds migrating and raising their young

Recently, my fiancé Erin and I spent a morning near a pond at a city park in Tucson, Arizona.  The day was warm and beautiful, pollen floated through the shade of trees over head, and Common Grackles (Quiscalus quiscula) seemed to be everywhere.

The male birds were calling shrilly with their metallic vocalizations and chasing females.  The females by contrast were dutifully collecting sticks, grass, any number of things that looked like good material for nest building.  The males constantly harasses the female grackles going about their tasks, following them, puffing themselves up to look big and impressive.  The males gathered together in little groups, puffing on little display dances. If the female grackles were watching these shows, it was from the corners of their eyes as they feigned disinterest.

I’d heard of hummingbird chicks that had fallen out of a nest being rescued by a wildlife rehabilitation organization recently, so I knew the timing was right.  The season of mating and babies is upon southern Arizona, and I’ve also happened upon duck eggs recently. Soon, there will be birds laying eggs and having chicks in the more northern part of the United States as well.  The spring is also a time of migration, when birds come north from their warmer wintering grounds.

This is one of the best times of year to get outside and watch birds.  Here are some tips.

Spending time near the sunny edges of a forest rather than deep in the interior is a good idea, especially in the early morning, according to All About Birds.  Often the edges are warmed by the sun more easily, waking insect life and drawing the birds that eat those insects in.  Being on the edge of a habitat can also mean that you’ll see a larger diversity of birds, birds for instance that live in the forest and birds that enjoy more open habitats.  As the day warms, cooler shadier places beneath trees will begin to have more birds. Of course, these are good tips for general bird watching, but spring is also a special time for many birds and a time to see spectacles you won’t see at any other time.

It isn’t just common grackles that are mating.  March through early may is when grouse lek. A few years ago Erin and I visited a hidden blind set up by the US Forest Service.  The blind was a small plywood structure designed to hide humans from Sharp-tailed Grouse (Tympanuchus phasianellus).  Grouse gather predictably in the same location year after year for lekking, a competitive mating dance between males trying to attract the attention of females.  The grouse arrive and inflate balloon-like structures in their chests, shaking their wings, dancing in circles all the while making an odd booming noise. The show is spectacular if you’re lucky enough to live in an area where you can reserve a place in a blind, and it’s usually free.

Unfortunately, many people don’t follow the guidelines properly, leaving the blinds too early or too late and scaring the birds away.  Lek blinds are available in South Dakota, Nebraska and other parts of the Great Plains.  Similar birds lek throughout the midwest and western US, where you can see them, according to The Sage Grouse Initiative.  Of course besides mating dances, migrations are sometimes spectacular shows of their own during the spring.

The migration of Sandhill Cranes (Antigone canadensis) is perhaps one of the most spectacular migrations left on Earth that’s so easily accessible to the average American.  In Kearney, Nebraska, it’s rather cold in the early morning in February through early April, but those are the times you can hear the otherworldly trill of cranes overhead.  Driving past fallow corn fields or standing in huddles on bridges over the Platte River, hundreds of people descend on the town of Kearney to see the sandhill cranes on just a stop over between their wintering grounds to the south and their breeding grounds in the Arctic.  Of course, plenty of other birds migrate besides cranes.

In Texas’s Gulf of Mexico, birds often arrive on the coast exhausted, Smithsonian reports.  These birds fly great distances over the open ocean from Latin America and stop at the first place they can rest, coming to land in large numbers before continuing on their way north.  Migrations across water can be perilous too, and sometimes a storm catches a bird and blows her far from the original destination.

When I was volunteering as a parrot research field technician on Great Abaco Island in the Bahamas, I witnessed an accidental bird visitation.  On a small pond on the island, a flamingo (Phoenicopterus ruber) was spotted and the woman who’d hired a group of us to help with her research loaded us up to go see.  The flamingo appeared disoriented, which was understandable because no other flamingoes live on Great Abaco Island.  It appears that a storm blew the flamingo to the island where we watched it for a few days before the bird departed, undoubtedly looking to find more of his kind.  These accidents are somewhat random but it’s possible to put yourself in a place where they’re more likely to occur.

Cool Green Science suggests that Dry Tortugas Islands, Florida (including a National Park) is a place where birds accidentally get blown in during the spring and so a good place to see rare birds during this time.

But anywhere you happen to be is likely a good place to see some birds because the magic of spring can’t be avoided.  The weather’s perfect to get outside, for birds and humans alike.