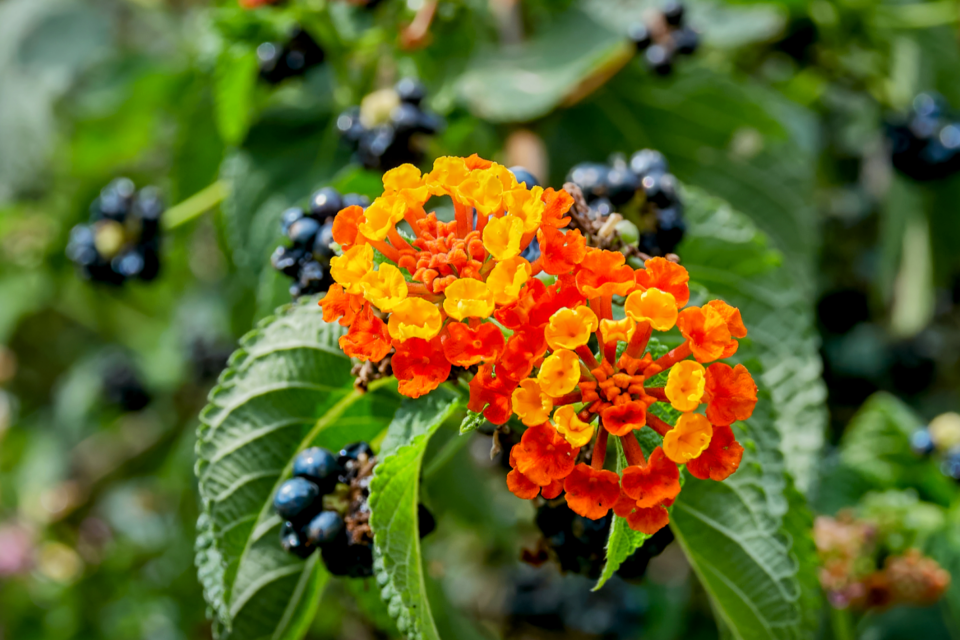 According to a new study published in the journal New Phytologist, Lantana strigocamara – a highly invasive horticultural herb or shrub native to Central and South America – is the second-ever documented case of a plant creating blue-colored fruits with layered fat molecules, using a trick of light called “structural color.”

Structural color is very common among animals. It is what gives many butterflies their bright blue coloring, or the peacock’s otherwise brown feathers their brilliant greens. This optical illusion of sorts is produced by microscopically structured surfaces fine enough to interfere with light, and is very rare in the plant world. Until now, only six species of plants have been found to produce their fruits’ hues using structural color.

What makes L. strigocamara special is that it creates this structural color in the skin of its berries by using layers of lipid molecules, or fats – a phenomenon previously documented in only one other plant species, Viburnum tinus. To create their unique colors, L. strigocamara’s blue fruits use microscopic structures in their skin to manipulate light and reflect the wavelengths human eyes perceive as blue, giving them a distinctive metallic finish.

Thus, structurally-colored berries have no color within themselves: when they are peeled and held up to the light, for instance, they look completely translucent. However, when placed against a dark background, they look blue again, due to nanostructures on their surface that are responsible for reflecting the color.

The scientists argue that, in evolutionary terms, structural coloring may help with seed dispersal, which could explain the fact that the handful of plants known to use this strategy are highly invasive and spread all over the world. By providing a strong contrast with the surrounding foliage, the mechanic, shiny nature of their fruit perhaps attracts animals to eat them and spread their seeds. Moreover, this theory could also fit with the fact that humans are highly interested in using these plants in horticulture.

“The fact that they made their way into horticulture suggests that we are susceptible to the same things are that other animals find attractive about them,” explained study co-author Stacey Smith, a professor of Ecology and Evolutionary Biology at the University of Colorado, Boulder. “We’re like, oh, look at that sparkly, cute thing. I should put that in my garden.”

However, another evolutionary explanation could be that the thick, fatty layer that creates the color is a protective mechanism for the plant, providing defenses against pathogens or improving the structural integrity of the fruit.

Scientists hope that, as more structurally colored fruits are discovered, they will manage to learn more about the evolutionary prompts for this fascinating mechanism. According to study lead author Miranda Sinnott-Armstrong, a postdoctoral fellow at UC Boulder, so few of such plants have been found until now simply because people were not actively looking for them. “They’re out there. We just haven’t seen them all yet,” she concluded.