Carnivores play a key role in a healthy ecosystem • Earth.com 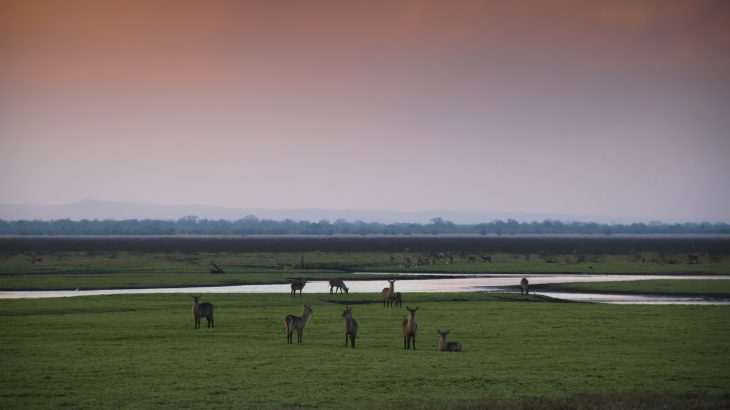 Carnivores play a key role in a healthy ecosystem

Carnivores play an important role in many ecosystems, and by preying on herbivores, they ensure that plants and vegetation aren’t grazed into extinction.

A diverse and balanced food chain is key to a healthy ecosystem, but in general carnivores are declining worldwide.

In the Gorongosa National Park in Mozambique, important carnivores like leopards, hyenas, and African wild dogs have disappeared entirely due to the Mozambican civil war.

While this has emboldened large herbivorous mammals to seek out new grazing areas, new research shows that unchecked herbivores with no predators degrade the ecosystem.

Seeing a unique opportunity to study large-mammal ecosystems and the impacts of carnivore declines, researchers from Princeton University monitored Gorongosa National Park, recording the number of herbivores in the area, what they ate, and how vegetation recovered when protected from grazing.

A study detailing their findings was published in the journal Science, and the results provide hope that degraded ecosystems can recover upon the reintroduction of large carnivores.

In Gorongosa, the researchers discovered that the lack of carnivores created a “landscape of fearlessness” or where herbivores, no longer afraid of being eaten, would graze in open areas that were previously too risky.

“We found that one of the common antelope species, bushbuck, which typically is a very shy, secretive forest-dweller, has expanded out into the open plains,” said Robert Pringle, a senior author of the study. “The plants in the plains are very nutritious, and the bushbuck that have colonized those areas are bigger and in better shape than their counterparts in the forest. And the presence of bushbuck in this new habitat has negative effects on the plants that bushbuck eat.”

The presence of herbivores in previously high-risk areas has created ripples throughout the entire food chain according to the researchers.

Starting in 2015, the Princeton researchers surveyed the park and GPS collars were used to track movements and locations of different herbivores.

The researchers also analyzed animal scat to find out what plants what were being eaten and how nutritious each plant was. All of the data was used to help develop experiments that would illustrate the impacts of predation and lack thereof on an ecosystem with large herbivorous mammals.

“The two most important pieces of the study were two experiments that Justine [Justine Atkins was the lead researcher of the study] performed in the field in 2016 and 2017,” said Pringle. “One was to use the sounds and scents of large carnivores to simulate risk — the idea was to try to scare the bushbuck into thinking that predators were present and see how that affected their behavior.”

Once the bushbuck sensed that their predators had returned through the scents of carnivore urine and the sounds of leopard calls, they retreated to the cover of wooded areas. Atkins also prevented the bushbuck from eating plants in the open plains they preferred.

Once grazing stopped there, the plants recovered and grew back rapidly which was good news to the researchers.

Since the plants rebounded so quickly, the researchers say that reintroducing carnivores into an ecosystem would be beneficial to plant diversity and growth.

“Our work really underscores the importance of top carnivores, which are declining globally,” said Ryan Long, a co-author on the project. “Carnivores influence ecosystems in complex ways that go beyond just killing and eating other animals, but it can be really challenging to get experimental evidence of those kinds of effects in large-mammal systems.”

In 2018, a pack of African wild dogs was introduced into the park, and the project has been extremely successful in bringing balance back to the park’s food chain and ecosystem.