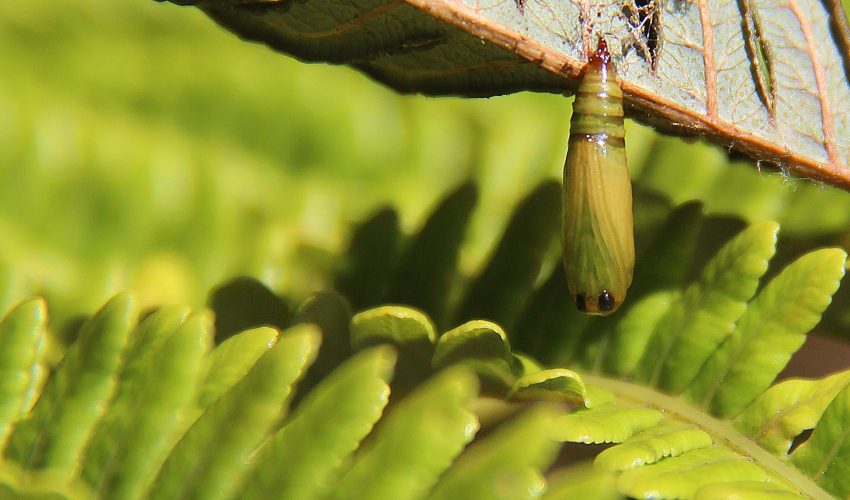 Carnivorous caterpillars are hungry… for flesh

With the possible exception of vegetable gardeners, to whom they are anathema, most people probably view caterpillars as benign, if slightly icky, creatures.

Eric Carle’s classic children’s book The Very Hungry Caterpillar probably best encapsulates popular perceptions of the larvae of Lepidoptera, the butterflies and moths. They mindlessly chew their way through the available vegetation, fattening up until they pupate and emerge as beautiful winged adults.

Most caterpillars—perhaps 99%—do follow some version of this pattern. However, a select few have carved out more savage predatory niches. These enfants terribles are hardly sluggish tubes of flesh. They range from devious and manipulative to outright raptorial.

The Lepidoptera are more known for their defenses—venomous spines and hairs, and plant-derived toxicity—than for their capacity for violence. But some have evolved to fill niches that require a bit of wet work. Perhaps 200 species of Lepidoptera produce predatory larvae. There’s a spectrum of behavior in predatory caterpillars. Some retain a relatively pastoralist lifestyle, merely browsing on aphids and scale insects or their sugary secretions, known as honeydew. Others are mutualistic with, or parasitic upon, ants. Certain species are cannibalistic. Some scavenge dead insects. And others still actively prey upon living insects, notably in Hawaii.

A number of hypotheses have emerged to explain the transition from herbivorous to carnivorous behaviour. Cannibalistic species may have evolved due to a tendency for some groups to eat their hatched eggs as well as sterile or unhatched eggs in the same brood. Especially in cases where the cannibalism occurs on parasitized conspecifics, which are as immobile as eggs, it’s easy to see how this leap may have been made.

Caterpillars that feed on the same plants favored by scale insects and aphids would do well to avail themselves of the easy food the creatures provide. In some cases, omnivorous caterpillars like the orange bagworm moth Cryptothelea gloverii seem to prefer plants that are infested with pests like scale. Whether it be their sugary honeydew excrement or the creatures themselves, they’re nearly as available as the plants upon which they feed. So: why not?

Add to that the protective services provided by ants, who often “farm” the same insects, and you have a recipe for evolutionary success. This occurs in hairstreak, blue, and metalmark butterflies (Lycaenidae and Riodinidae) and in arctiid moths. Some caterpillars have even adapted to assume similar roles to aphids and scale insects. They themselves produce honeydew and are cared for by ants.

Through chemical signals produced by special organs and sounds that mimic the ant’s own, they manage to convince the ants that care for them and sometimes even to transport them to their nests and protect them until they metamorphose. Some of the sounds they produce have been found to be similar to those produced by queen ants, suggested that the caterpillars have coopted the sounds to encourage care by their hosts. Certain species of lycaenid butterfly, such as the European large blue (Phengaris arion), even use this strategy to gain entrance to ant nests and then eat ant larvae or pupae.

While only one butterfly species, the harvester (Feniseca tarquinius) and one species of moth, the pearly-winged lichen moth (Crambidia casta) are reported as carnivorous in continental North America, the evolutionary separation of the Hawaiian islands has provided a crucible for the formation of numerous species of predatory caterpillars. Here, the predatory strategies have evolved significantly. These little loopers aren’t parasitic, like the myrmecophilous or ant-loving species. Nor do they restrict their consumption to largely stationary insects like scales and aphids. They actively hunt for prey.

The Eupithecia moths of Hawaii demonstrate this most dramatically. They look like regular inchworms at first glance, with legs on the anterior and posterior sections and a loop of a body between. Using their hindlegs, they protrude from branches and leaves and wait for passing prey to touch their hind ends. Once an unfortunate insect or spider touches their derrierre, they rocket backwards and snag it with specially adapted, claw-like front legs. It is thought that this habit may have developed due to a preference for high-protein pollen in ancestral species in combination with a defensive habit of snapping at attackers. The absence of large numbers of predatory insects such as mantids in Hawaii may have allowed them to exploit this niche. Unlike other Eupithecia species that have herbivorous diets, these species are rarely parasitized by wasps and may even eat them if they try.

Another genus of moths, Hyposocoma, has several members that have evolved to eat snails. The caterpillars use silk to ensnare the unsuspecting mollusks and then devour them. After they’re done with their al fresco escargot, they sometimes use the shells to decorate the silken cases that cover their rear ends. This is common practice in predatory caterpillars, many of which attach insect exoskeletons to their cases. Intriguingly, several species of Hawaiian Hyposocoma have retained vegetarian lifestyles but live underwater and feed on algae.

And it’s not just caterpillars who have a taste for flesh. The Calyptra moths can actually pierce human skin and suck blood, though this only supplements their largely fruit-based diets. That’s nature for you. Just when you think a group of animals is safe and harmless, a member turns up red in mandible and claw, and ready to feed.