How cavefish evolved for millions of years without sunlight • Earth.com 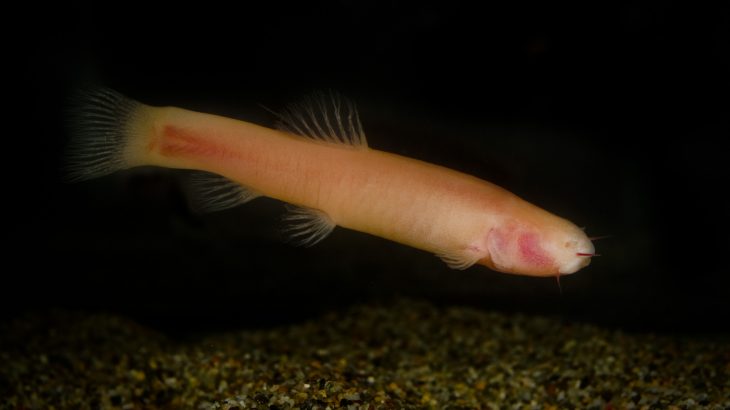 How cavefish evolved for millions of years without sunlight

When dinosaurs roamed the Earth, researchers theorize that some ancient ancestors of modern mammals escaped to subterranean environments or became exclusively nocturnal to avoid being eaten.

It’s called the nocturnal bottleneck theory and it helps explain the lack of key characteristics in cave and nocturnal species today.

Researchers from the Karlsruhe Institute of Technology in Germany set out to investigate how species evolve in extreme environments like a sunless cave. Now, a new study has provided interesting insights into the evolution of a blind cavefish found in Somalia.

The research, published in the journal Current Biology, shows that a species of blind cavefish,  Phreatichthys andruzzii, lacks an ancient system of DNA repair found in most other animals except placental mammals including humans.

It’s an ancient system that harnesses visible light to repair DNA caused by UV light, but over millions of years, the blind fish evolved without this crucial repair system.

“We have revealed in a species of blind cavefish the loss of an ancient DNA repair system that is highly conserved,” said Nicholas Foulkes, an author of the study. “Curiously, the only other animals previously known to lack photoreactivation DNA repair are placental mammals. So, what we see in this species of cavefish may be the first stages in a process that happened before in our ancestors in the Mesozoic era.”

Phreatichthys andruzzii was an ideal model for study because it has lived without sunlight for over three million years and so can provide a glimpse into evolution in extreme environments as well as help explain changes in a species DNA repair systems.

The researchers discovered mutations in the cavefish that disrupt DNA repair genes.

Phreatichthys andruzzii was also found to lack an element that enhances DNA repair in response to sunlight because other genes were activated in its place.

What’s especially interesting is that other cavefish species contain the DNA repair mechanisms and so the researchers say further study is needed to understand what drove the cavefish in Somalia to adapt the way it did.

“Many features of modern mammals, such as the anatomy and function of the eye, show tell-tale features of a nocturnal lifestyle,” said Foulkes. “It means we can now more confidently predict that mammalian ancestors experienced a prolonged period of evolution in complete darkness.

Image Credit: Luca Scapoli at the University of Ferrara