Chimpanzee stress can be caused by loneliness • Earth.com 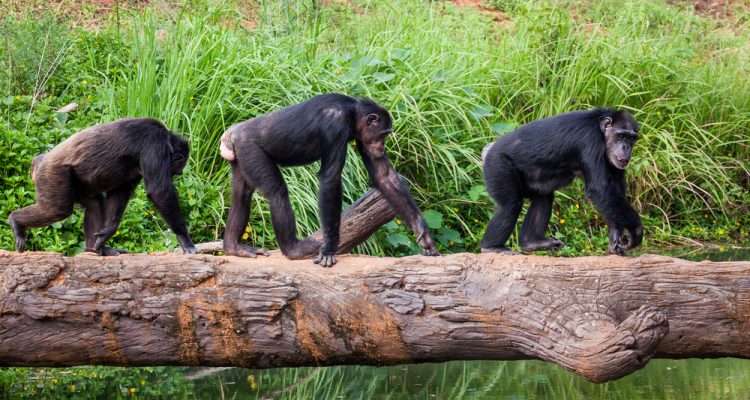 Chimpanzee stress can be caused by loneliness

Chimpanzee stress could be caused by loneliness: social chimps are much more chill and happy.

Chimpanzees are one of mankind’s closest relatives, but we may have even more in common with our distant, hairy relatives than had previously been thought.

A new study revealed that the simians release fewer chimpanzee stress hormones after having interacted with other chimps – they are happiest when they are up to monkey business with their pals.

“The social relationships amongst chimpanzees are fairly similar to the ones among humans,” said Dr. Roman Wittig of the Max Planck Institute for Evolutionary Anthropology. “Therefore, chimpanzees can help us to learn how friends can help to buffer stress in humans.”

Dr. Wittig and his team studied how chimpanzees responded after a stressful event, such as encounters with an enemy chimp. They recorded the levels of glucocorticoid, a stress-related hormone, in a population of chimpanzees following grooming, rest, and a stressful experience.

The study found that if a chimp interacted with a friend during the stressful event, the glucocorticoid levels did not rise. Stress hormones were also lower after a grooming session than they were during a period of rest.

Because chimpanzees and humans are so closely related, studies such as these can help shed light on how humans respond chemically to stress. Such information can also lead to better coping strategies for managing stress.