Chimpanzees synchronize their steps when walking together • Earth.com 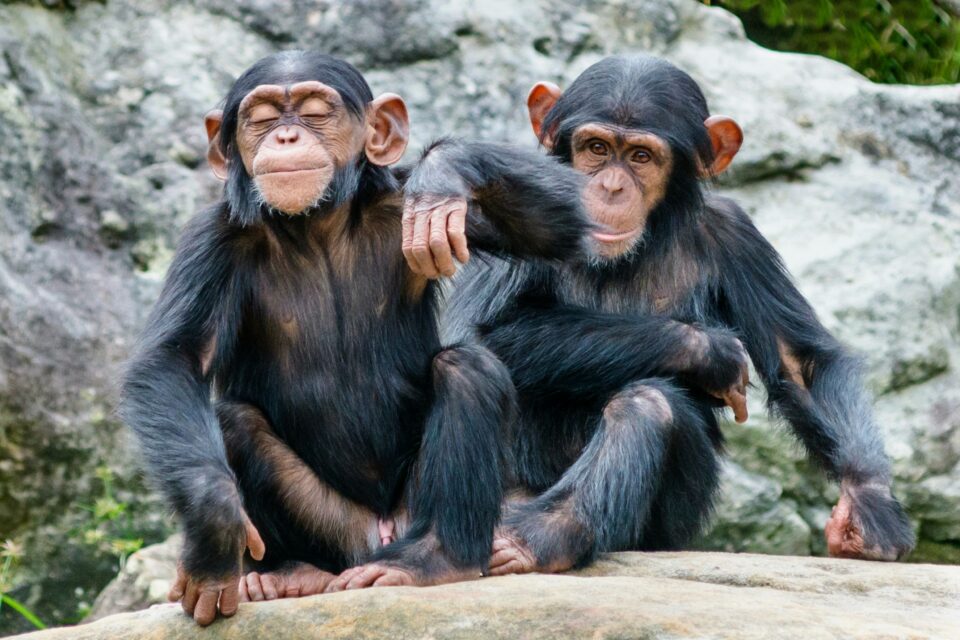 Chimpanzees synchronize their steps when walking together

Although scientists have already noticed that chimpanzees can coordinate their actions when working towards a goal – such as pulling a string to release food – much less was known about their propensity to coordinate spontaneously. Now, a team of experts from the University of St Andrews and the Central European University in Vienna has found that chimps share a well-known human tendency to unintentionally synchronize their steps when walking alongside one another.

By recording the walking behavior of chimpanzees at the Chimfunshi Wildlife Orphanage Trust (a sanctuary in Zambia) both when walking alone and when walking next to others, the scientists observed that chimps exhibit unintentional synchronization in their steps when walking next to one another. These findings suggest that humans’ strong tendency to coordinate simple actions is shared with one of our closest primate relatives, and it might thus be an ancestral trait.

“Humans deliberately plan and coordinate actions with others during sport games, group dances, musical ensembles, or military actions. But it is also part of our daily life – like carrying items together or getting a child dressed. Indeed, joint actions have been suggested to be crucial for our success as a species because much more can be achieved together than alone. In fact, we can’t help it and coordinate actions even when it is not necessary to do so, such as falling into the same rhythm with someone walking next to us,” explained study lead author Manon Schweinfurth, a lecturer in Psychology and Neuroscience at St Andrews.

“In contrast, one of our closest living relatives, the chimpanzee, does not appear to show the same preference for rather complex joint actions. But little is known about simpler forms of joint action, such as a tendency to fall into inter-individual synchrony. Chimpanzees are particularly interesting here, as they are a good model for our last common ancestor with other African great apes.”

The new study, which involved both male and female chimpanzees of different ages, has provided clear evidence that, when they walked together, a step by one walker was followed by the same respective foot of the other walker in 79 percent of the cases within less than half a second.

“This study provides evidence that chimpanzees temporally synchronize their body movements to the movements of their conspecifics. This interpersonal coordination of movements is often called entrainment and relies on perception-action links that become coupled. Understanding which mechanisms humans share with other species can help us understand the evolutionary origins of more sophisticated forms of joint action,” Dr. Schweinfurth concluded.