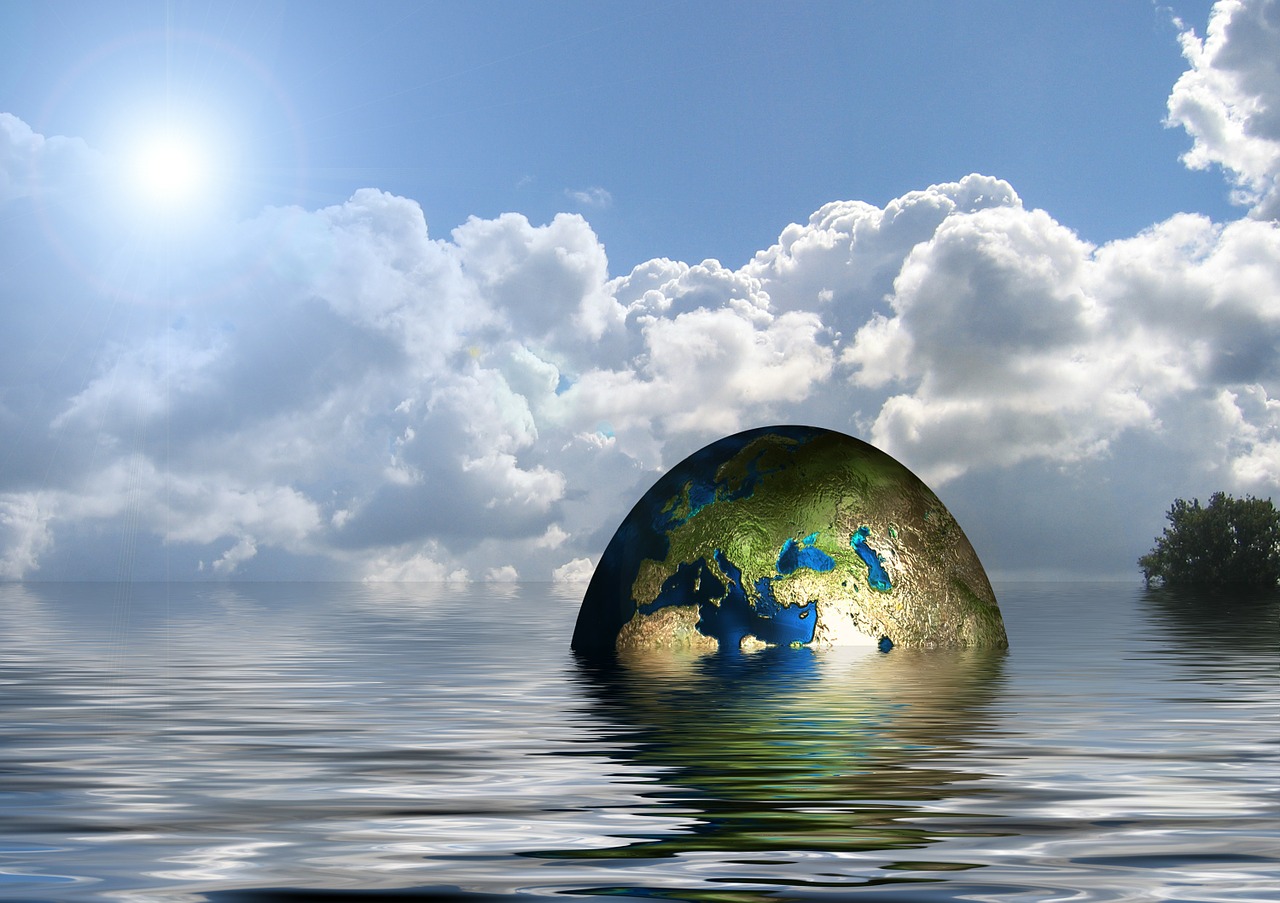 In a sweeping environmental manifesto aimed at spurring action, Pope Francis called Thursday for a bold cultural revolution to correct what he said was a “structurally perverse” economic system in which the rich exploited the poor, turning Earth into an “immense pile of filth.”

Francis framed climate change as an urgent moral crisis to address in his eagerly anticipated encyclical, blaming global warming on an unfair, fossil fuel-based industrial model that harms the poor the most.

The document released Thursday was a stinging indictment of big business and climate doubters, and aimed to inspire courageous decisions at U.N. climate negotiations this year as well as in domestic politics and everyday life. Citing Scripture and his predecessors, the pope urged people of every faith and even no faith to undergo an awakening to save God’s creation.

“It is not enough to balance, in the medium term, the protection of nature with financial gain, or the preservation of the environment with progress,” the pope wrote. “Halfway measures simply delay the inevitable disaster. Put simply, it is a matter of redefining our notion of progress.”

Environmental scientists said the first-ever encyclical, or teaching document, on the environment could have a dramatic effect on the climate debate, lending the moral authority of the immensely popular Francis to an issue that has long been cast in purely political, economic or scientific terms.

“This clarion call should guide the world toward a strong and durable universal climate agreement in Paris at the end of this year,” said Christiana Figueres, the U.N.’s top climate official. “Coupled with the economic imperative, the moral imperative leaves no doubt that we must act on climate change now.”

Scientific data on Thursday backed up Francis’ concerns. The U.S. National Oceanic and Atmospheric Administration released figures showing that last month was the hottest May around the globe in 136 years of global records. In addition, the first five months of 2015 made up by far the hottest year on record, with very real effects: some 2,200 people have died in India’s heat wave.

Veerabhadran Ramanathan, a Scripps Institution of Oceanography scientist who has briefed the pope on climate issues, said the encyclical is a “game-changer in making people think about this.”

“It’s not politics anymore,” he said, adding that science is often difficult to understand but that people respond to arguments framed by morality and ethics.

The energy lobby, however, was quick to criticize the encyclical’s anti-fossil fuel message.

“The simple reality is that energy is the essential building block of the modern world,” said Thomas Pyle of the Institute of Energy Research, a conservative free-market group. “The application of affordable energy makes everything we do – food production, manufacturing, health care, transportation, heating and air conditioning – better.”

Francis said he hoped his paper would lead both ordinary people in their daily lives and decision-makers at the Paris U.N. climate meetings to a wholesale change of mind and heart, urging all to listen to “both the cry of the Earth and the cry of the poor.”

“This vision of `might is right’ has engendered immense inequality, injustice and acts of violence against the majority of humanity, since resources end up in the hands of the first comer or the most powerful: the winner takes all,” he wrote. “Completely at odds with this model are the ideals of harmony, justice, fraternity and peace as proposed by Jesus.”

The timing of the encyclical was intentional: Nations across the world will meet in Paris at the end of the year to try to come up with a binding agreement to reduce heat-trapping gases. Some experts say it could be Earth’s last chance to avoid a milestone of dangerous global warming: Another 1.1 degrees Celsius of warming from now (2 degrees Fahrenheit).

The encyclical “Laudato Si, (Praise Be): On Care for Our Common Home” is 180 pages of pure Francis, named for a prayer penned by his namesake, the nature-loving St. Francis of Assisi.

It’s a blunt, readable booklet full of zingers by the Argentine “slum pope” that will make many conservatives and climate doubters squirm, including in the U.S. Congress where Francis will deliver the first-ever papal address in September.

No encyclical has ever drawn this much popular and sustained attention, even after having been leaked earlier this week. The hashtag (hash)LaudatoSi was trending Thursday on Twitter.

Deke Arndt, a top U.S. federal climate scientist and Catholic, was brought to tears by the eloquence of the document.

“There are certain things that science will never be able to say so beautifully,” he said. “I think it speaks across the spectrum of human experiences … It speaks to the soul and the inner part of us.”

But the leading skeptic in the U.S. Congress, Republican Sen. James Inhofe, said he feared the encyclical will be used by “alarmists” to push policies that will lead to big tax increases. He said the poor will actually “carry the heaviest burden” of policies to phase out fossil fuels with renewable energy sources.

In the encyclical, Francis accepts as fact that the world is getting warmer and that human activity is mostly to blame.

Citing the deforestation of the Amazon, the melting of Arctic glaciers and the deaths of coral reefs, he rebuked “obstructionist” climate doubters who “seem mostly to be concerned with masking the problems or concealing their symptoms.” And he blamed politicians for listening more to oil industry interests than Scripture, common sense or the cries of the poor.

“The earth, our home, is beginning to look more and more like an immense pile of filth,” he wrote.

He praised a “less is more” lifestyle, one that shuns air conditioners and gated communities in favor of car pools, recycling and being in close touch with the marginalized. He called for courageous, radical and farsighted policies to transition the world’s energy supply from fossil fuels to renewable sources, saying mitigation schemes like the buying and selling of carbon credits won’t solve the problem and are just a “ploy which permits maintaining the excessive consumption of some countries and sectors.”

What is needed, he said, is a “bold cultural revolution.”

“Nobody is suggesting a return to the Stone Age, but we do need to slow down and look at reality in a different way, to appropriate the positive and sustainable progress which has been made, but also to recover the values and the great goals swept away by our unrestrained delusions of grandeur,” Francis wrote.

Catholic Republican presidential candidates said they don’t necessarily agree with the pope when it comes to coping with climate change and that he shouldn’t be getting involved in it in the first place.

“I don’t think we should politicize our faith,” U.S. Republican presidential candidate Jeb Bush, a Catholic convert, said on the eve of the encyclical’s release. “I think religion ought to be about making us better as people and less about things that end up getting into the political realm.”

Yet one of Francis’ core points was that there really is no distinction between human beings, their faith and the environment: they are all part of a single integral ecology.

“Everything is related, and we human beings are united as brothers and sisters on a wonderful pilgrimage, woven together by the love God has for each of his creatures and which also unites us in fond affection with brother sun, sister moon, brother river and mother earth,” he wrote.

Cardinal Peter Turkson, whose office wrote the first draft of the encyclical, acknowledged that the pope was no expert in science but said Francis had consulted widely and was fully justified in speaking out about an important issue.

Within the church, many conservative Catholics have questioned the pope’s heavy emphasis on the environment and climate change over other issues such as abortion and marriage.

Francis does address abortion and population issues briefly in the encyclical, criticizing those in the environmental movement who show concern for preserving nature but not human lives. The Catholic Church has long been at odds with environmentalists over how much population growth degrades the environment, since the issue boils down to access to contraception and abortion.

John Schellnhuber, the scientist credited with coming up with the 2 degree goal, says it’s a “myth” that a growing population is responsible for environmental decay.

“It’s not poverty that destroys the environment,” he told the Vatican press conference launching the document. “It’s wealth, consumption and waste. And this is reflected in the encyclical.”