In a number of different cultures, crocodiles are worshipped • Earth.com 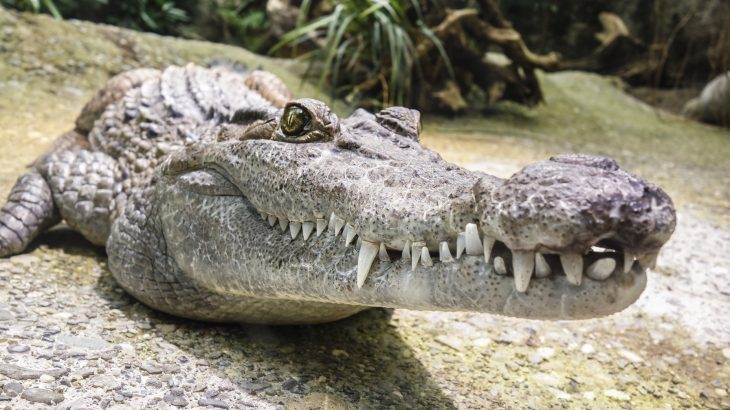 In a number of different cultures, crocodiles are worshipped

The human understanding of death has always been closely tied to religion.  What other human activity claims to have any sort of control over death than a system of worship?  The oldest evidence for any sort of spiritual or religious belief comes from the remains of ceremonial burials dating back to the Paleolithic Era.  The burials include human corpses interred with tools and flowers. It seems that from the beginning, religions were about the business of asserting control over the aspect of life most impossible to control or come to terms with – death.  Religions ever since have seemed obsessed with death and the hope for human immortality.

The Ancient Egyptians built enormous stone monuments with slave labor and created elaborate embalming rituals as evidence of their fear of death.  Christians and other monotheistic religions make Heaven and Hell as major tenets of the faith. Other religions focus on reincarnation as a way to escape the brevity of human existence.  Considering the obsession with death, it’s not surprising that worship would turn towards animals that can kill.

Few animals inspire as much fear as crocodilians.  Crocodiles and their relatives seem to have ambivalence towards humans, occasionally eating them and showing no obvious outward fear for us.

In ancient Egypt, there were many cults surrounding different deities associated with animals both wild and domesticated.  Ibises, cats and jackals have been found mummified. One of the most fascinating cults focusing around an animal deity is the ancient Egyptian crocodile cult.  Hundreds of mummified crocodiles, both those killed very young and those that died of old age, have been found. It’s not entirely clear what the exact role of the crocodiles were in these cults, but they were associated with temples to Sobek, a crocodile headed god and other lesser gods as well.  There are breeding facilities found with striking similarity to modern crocodile or alligator captive rearing facilities from the Graeco-Roman period of ancient Egypt. It seems that especially docile crocodiles were kept alive in temples where they were venerated in life. Other parts of the African region also show adoration for crocodiles.

In Madagascar, there is a myth associated with a particular village. The myth says that long ago, an old man came to the village and walked around asking for water.  Instead of granting him this simple request, the villagers shut their doors and ignored the old man’s thirst. Only one woman gave the old man water and so the old man told her, “When your child cries tonight, take your children and leave the village”.

That night, it rained heavily in the village and the woman’s young child started crying.  Remembering the old man’s advice, the woman took her children and left her home, walking away from the village in the rain.  The next day the woman returned to the village to find it under a lake. In the lake swam the villagers who had been magically transformed into crocodiles.  The old man had been a sorcerer and this was his revenge.

Today, a village in Madagascar still holds this myth to mean that crocodiles in a local lake represent the embodiment of their ancestors.  When the villagers have a need of assistance, they sing a prayer which brings the crocodiles to the edge of the lake where they’re given an offering of zebu (a type of cow) meat.  If a crocodile accepts the meat, it means the prayer will be answered. If the meat is ignored, it means the prayer will be ignored as well. It’s hard to know how old such a tradition may be.  Since Madagascar had its first human inhabitants arrive as late as 2,000 years ago, the crocodile worship in Madagascar can’t be older than Christianity. It’s possible that the worship at a particular lake in Madagascar is associated with a much older tradition.

In India, there’s a worshipful affection for crocodiles as well. India Times reports that there’s a temple in India guarded by a crocodile claimed to be vegetarian.  The crocodile lives in a pond near the temple where he’s fed daily by priests. It’s said that a crocodile living in the pond was once shot by a British soldier who then died of a snake bite as part of cosmic justice.  Another crocodile is said to have miraculously replaced the previous animal, leading to the idea that as soon as one crocodile dies, another replaces it. The Hindu reports on another venerated crocodile that was said to have lived to be 130 years old.  When the crocodile was found dead in its lake, local villagers mourned the deceased reptilian, even refusing to cook meals for the day.  Being eaten by a crocodile is also thought by some Hindus to be a good death.

In Australia, crocodiles are used as totem, associated with certain aboriginal groups and honored as such.  ABC Darwin Radio reports that the Larrakia people of northern Australia respect the crocodile, called ‘Dungalaba’ in their language.  The word is an important one, as it’s remembered as part of a language that is no longer spoken fluently by anyone. The crocodile is recognized as dangerous, but also the people desire it to live in its native habitat near them.  The relationship is similar to that of anyone who loves wild animals that can sometimes also be dangerous.

It’s easy to imagine that the mythology, worship and respect surrounding crocodiles in so many different cultures is an important way to face fear. Other dangerous animals and phenomena are traditionally worshiped or respected; things such as thunder, bears and so on all have their deities and myths.

When you can be literally eaten by a crocodile, it’s comforting to understand the animal and perhaps even the death of someone eaten by it in a mythological way.  By making crocodiles part of mythology, they become more sensible as does death. This imbues the crocodile and its prey with meaning otherwise lacking in an uncaring world.  When you can be eaten, it’s comforting to feel it means more than just a snack.